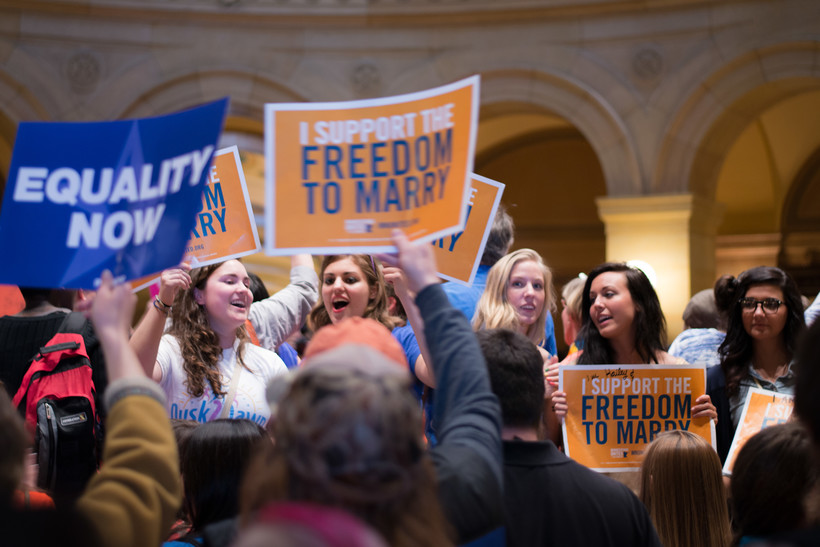 Some Same-Sex Couples In Wisconsin Will Get Married In Minnesota

Same-sex couples can start getting married in Minnesota today.

Some Wisconsin couples are hopping the border to tie the knot, even if that marriage won't be recognized in their home state.

Just across the river from La Crosse, Houston County is like most of the Minnesota counties that border Wisconsin. It's been offering new marriage license applications so same-sex couples can get married today.

Recorder Bev Bauer says the new applications reflect all couples. "The only thing that we changed is instead of saying bride and groom, it would be applicant, or party, or couple," she says.

Bauer says one same-sex couple has applied for a marriage license in Houston County, and they're from Wisconsin. Other counties are also reporting that same-sex Wisconsin couples are applying for licenses. Wisconsin does not allow or recognize same-sex marriages, but does recognize domestic partnerships.

Christopher Clark is an attorney with Lambda Legal, which fights for LGBT equality. He says if a Wisconsin couple gets married in Minnesota, they might receive more benefits.

"That couple may have access to some of the over 1,000 federal rights, benefits, and protections that are provided to married couples under federal law," says Clark.

Clark says if a same-sex couple from Minnesota gets married and moves to Wisconsin, their marriage would not be recognized in Wisconsin. They would have to register as domestic partners.

There's a law that fines and imprisons Wisconsin couples who enter "prohibited" marriages outside of the state. Clark says he's never heard of anyone being prosecuted for it, but it is a risk for same-sex couples.

According to University of California-Los Angeles's law school, which studies LGBT issues, there are almost 9,200 same-sex couples in Wisconsin.