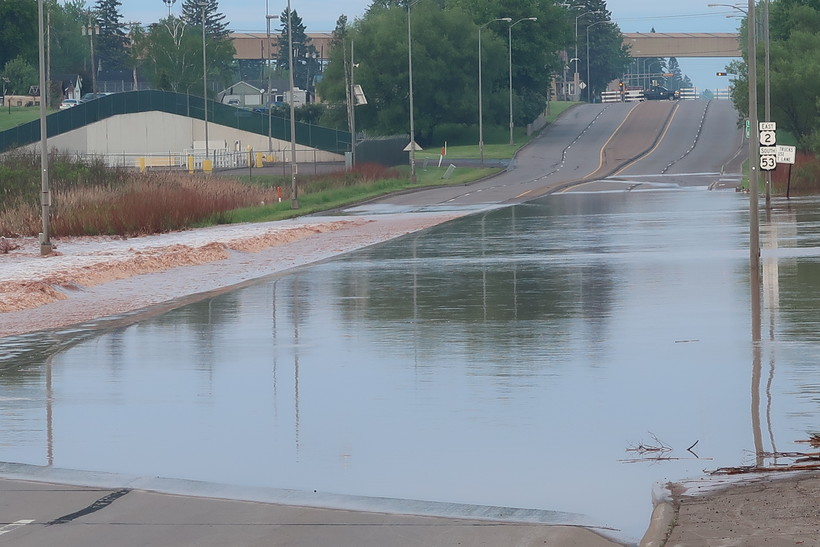 Floodplain Rules Could Force Homeowners To Rebuild Higher Or Further Away
By Danielle Kaeding
Share:

Some lakefront property owners in northern Wisconsin could be forced to move homes that were damaged by flooding last month. At least 121 seasonal and year-round homes around several lakes in Douglas County have been affected.

Vern Johnson and his wife have been living out of suitcases since last month's flooding damaged their home on Lyman Lake in northern Wisconsin.

"And several different motels because no matter what motel you get, they come up against the weekend and everybody's booked so you kind of got to jump to another one. That's what we're doing so far," laughed Johnson.

Johnson said maybe the reason he sounds a little more relaxed that he's been put out of his home, which has about a foot of water on the main floor, is that he has flood insurance.

Even so, Johnson's flood insurance won't cover the cost of moving around from place to place until they can get an apartment. He said he hopes repairs will only take a couple of months.

Some homes affected were located within the floodplain or the area most at risk of flooding.

"Those structures will very likely be determined to be substantially damaged and then those structures would either have to be removed from the property or if the choice was to rebuild them they would need to be rebuilt at the regional flood elevation," said Rannenberg.

In other words, they would have to rebuild higher up or further back from those lakes to reduce the risk of future flood damage and meet current development standards. Any property owner within a floodplain that experienced damage amounting to more than half the value of their home would fall into that category. However, it's unclear how many might be affected as local officials continue to gather information.

Rannenberg noted some cabins were built generations ago before floodplain regulations existed.

"Many of them are still in the same family of the original builders of these cabins," he said. "This is really the first time that this kind of an event has happened in Douglas County. This was a significantly more serious event than we had in 2011 (and) 2012."

Douglas County officials are doubtful whether cabin and homeowners will qualify for federal assistance to make repairs. Property owners are likely to foot the bill unless they have flood insurance or enough homes have been destroyed to qualify for federal aid, according to Michelle Staff, floodplain policy coordinator for the Wisconsin Department of Natural Resources.

"It takes a lot of damage for a community to get federal assistance individually for a house," she said. "Hopefully, they have flood insurance that would basically (allow them to) be able to rebuild. Otherwise, it would be their own money to rebuild."

A spokesman with Wisconsin Emergency Management said Monday that between 400 to 500 homes would have to be damaged to meet the threshold for federal assistance to individuals through the U.S. Federal Emergency Management Agency. The last time the state qualified for such assistance was in 2010 when flooding hit the Milwaukee area. A number of other grant and loan programs may be able to aid property owners if the community requests assistance.

State and local officials are still gathering information from people about the level of damage they've experienced. They've been encouraging people to call 211 to report any damage.

Dan Corbin, the chairman for the Town of Summit, which includes Amnicon Lake, said people are hurting and he isn't sure what can be done for them.

"If homeowners are affected, I believe they deserve some help … this isn't their fault," he said.

Floodwaters have done a lot of damage to Vern Johnson’s home and belongings from files to furniture to family photos. Still, he tried to keep it all in perspective.

"It's just stuff. Stuff can be fixed or replaced," he said. "As long as you got family and loved ones around, that's what matters."

The money is immediately available to reimburse Wisconsin for repairs to state and federal highways that were damaged, according to Nancy Singer, spokeswoman for the Federal Highway Administration.

"We've made that pot of money so the state can be assured that the minute the repairs are done, they need to be repaid, the funds will be there," she said.

The Wisconsin Department of Transportation already finished repairs on two out of three projects. On Friday, the state reopened U.S. Highway 53 near Solon Springs to four lanes after repairing culverts that were damaged by last month's storms. The agency also repaired a washout on a bridge over the Black River on state Highway 35 near Pattison Park, according to Diana Maas, spokeswoman with the Wisconsin Department of Transportation.

"The only area that's still impacted and closed because of flooding damages is U.S. Highway 2 in Bayfield County at North Fish Creek," said Maas. "We have contractors on site already working on repairs there."

Work on all three projects is expected to cost around $3.3 million. A spokesman with Wisconsin Emergency Management said the state doesn't expect to release damage estimates on town and county roads for at least another week.