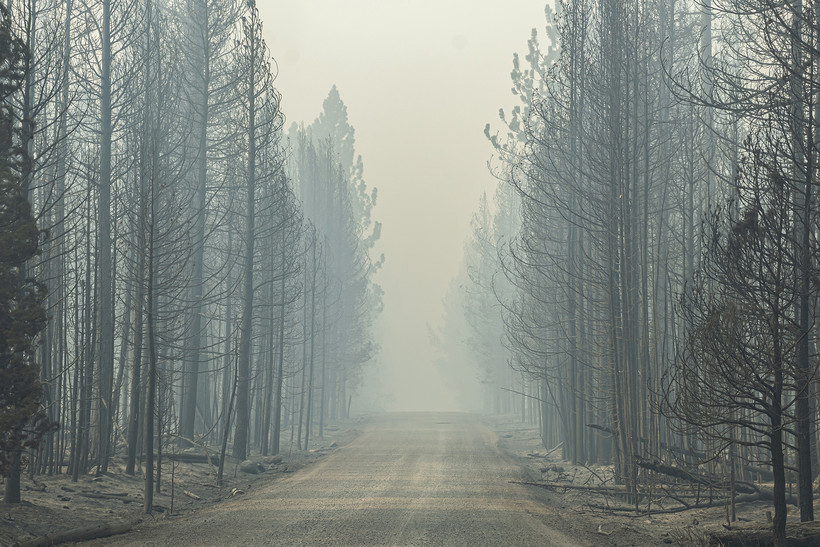 Smoked Out: As Wildfires Ravage Canada And Western US, Wisconsin's Air Quality Is Challenged

As of Friday, 83 wildfires were actively burning across 13 states, according to the U.S. National Interagency Fire Center. That includes 22 in Idaho, 20 in Montana, nine in Washington and six in Oregon of which none have been contained.

People in Wisconsin are feeling the effects of smoke traveling from the wildfires out west and from Canada, which so far this year has set records with 263 uncontrolled active fires in nine of 13 Canadian provinces. Firefighters and emergency responders have prioritized fighting massive and destructive fires in British Columbia and Ontario.

These fires are pumping out volumes of smoke that are carried by upper level winds in the atmosphere to places like Wisconsin and farther east. And because winds tend to be a bit weaker in mid-summer, there's not much in the way of helping to push that smoke out of the area.

Hazy skies and respiratory attacks for those who are more at risk are becoming more normal and effect people coast to coast, said Jeffrey Pierce, an associate professor in the Department of Atmospheric Science at Colorado State University.

"The concentrations that Wisconsin was getting of smoke particles, and New England even, are quite high, to the levels that certainly would exacerbate health effects for people with asthma or COPD (chronic obstructive pulmonary disease)," he said.

Typically in Wisconsin, smoke that begins to have an effect on people will measure about 10 micrograms per meter cubed. Wisconsin's typical numbers are 5 micrograms, Pierce said.

Around July 20, Wisconsin was put under an air quality alert because measurements showed those particles were at or around 50 micrograms per meter cubed.

To avoid the smoke, there's not a whole lot to do apart from staying inside. If you need to head out, try to keep it to the morning before it gets hot or at night after the sun has set. Pierce said that N95 masks, which some people might have handy because of COVID-19, or KN95 masks will protect you from smoke and at the very least significantly limit how much smoke you breathe in.

But cloth masks and bandanas won't do much to reduce the effects of the smoke.

Jonathan Erdman, a senior meteorologist at weather.com, said the prevalence of these wildfires across the nation are the result of widespread drought in the western U.S. Compounding the problem are a series of heat waves, including one that produced 120-degree heat in western Canada. Those heat waves have left the ground parched and provided tinder for lightning during the early summer months or human-caused sparks.

"It's just kind of a perfect storm to ignite wildfires in the West," Erdman said. "And once those wildfires are ignited, that smoke is then transported by the upper level winds. And that's what we've seen right here in the upper Midwest in Wisconsin."

Throughout the summer, he said he'll be watching for any signals that this winter could bring an end to the droughts in the west.

In California, for example, he said most of the rainfall comes in late fall and into mid-spring. If those areas go through another dry winter, as they have for the past two, that's bad news for next summer.

"That's not only impactful ... for water supply, but that could mean another spring and summer of completely dried out vegetation that could be a tinderbox for more wildfires," he said.

California is still months away from its wet season, and climate change is pushing the start of that season even later into the calendar year.

In the meantime for those of us in the Midwest and farther east, Pierce cautioned that even though wildfire smoke loses its smell through chemical reactions in the atmosphere as it travels, the particles are still in the air and potentially dangerous.

He said research is showing that there's a noticeable difference in awareness and response from people who are in smoke depending on whether they can smell it.

"People may be more likely to take protective actions to keep themselves from breathing in the smoke compared to when that smoke arrives after a day or two of traveling (and) it doesn't have its smell anymore," he said. "People might think it's fog or some other form of haze."

Erdman said having that awareness is one of the most important steps. Pay attention to air quality alerts in your area and change plans to stay indoors as much as possible.

Also, he advised paying attention to drought and wind conditions and consider whether outdoor burning is safe.

"If it's a hot, dry, windy day, it's probably not a good day to do any outdoor burning," he said.

The Far-Reaching Effects Of Wildfire Smoke, Including In Wisconsin 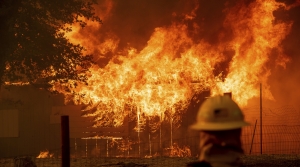 After wildfires in Canada caused air quality warnings in Wisconsin last week, we talk about the effects of smoke traveling great distances, and whether we can expect to see more of this to come while the climate is changing.