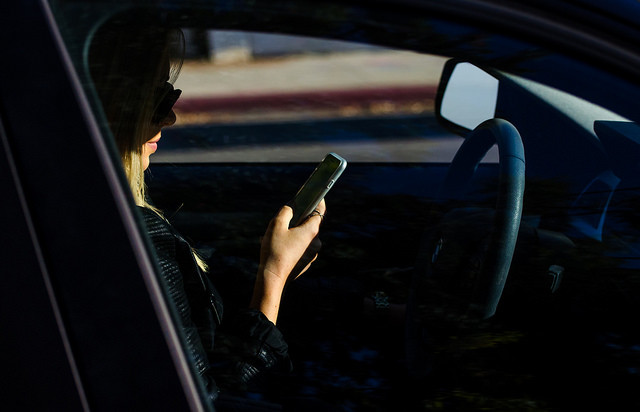 The National Highway Traffic Safety Administration reports that 32,675 people died in motor vehicle crashes in 2014, with 10 percent of those fatalities caused by distracted driving.

Distracted driving is a growing issue as the number of deaths from distracted drivers is rivaling the number of deaths from drunk drivers—who represent roughly one-third of fatalities, about 9,967 deaths in 2014, according to Dr. David Greenfield, founder of the Center for Internet and Technology Addiction and an assistant clinical professor of psychiatry at the University of Connecticut School of Medicine.

Any activity that could dissuade a person's attention from the main task of driving qualifies as distracted driving, which potentially jeopardizes the safety of the driver, passenger and bystander.

Distracted driving can range from grooming and eating to using a cell phone or a navigation system, but Greenfield said the smart phone is a game changer.

People who drive while sending or reading text messages are 23 times more likely to be involved in an automobile crash than other drivers.

A great number of people are familiar with the danger of using a phone while driving. Nonetheless, knowing isn’t enough to prevent people from doing it.

A 2015 distracted driving survey from Erie Insurance reported that one-third of drivers admitted to texting while driving. And, new research conducted by Liberty Mutual Insurance and Students Against Destructive Decisions revealed 68 percent of teens admit to using apps while driving.

Though state lawmakers acknowledge this issue and have even cracked down on it with new laws, Greenfield said laws are only a portion of the solution.

"Laws are a part of the answer, but not the answer," Greenfield said. "We don’t have enough police officers to shape the behavior of people."

One of the most significant steps to reducing distracted driving deaths is educating the public on the harm mental and physical distractions while driving can cause.

"People need to know that the smart phone is addictive," Greenfield said. "There is a compulsive element for a use of this device that continues when we get into our automobile."

Greenfield said a number of technologies have been developed in an attempt to eliminate potential distractions from smartphones, noting that there are several apps that can shut down a data stream while a car is moving. He also pointed to AT&T's DriveMode app, called It Can Wait, that silences incoming text notifications, helping the driver stay focused on the road.

Greenfield said smartphone manufacturers are a key player in laying this issue to rest, which he said will require manufacturers to design a phone that recognizes that the owner is in the driver's seat and shuts down the data stream's ability.

Although new laws are only part of the solution, they're a positive step towards increasing awareness of the issue, Greenfield said. Many officers already give distracted driving tickets, but there’s a growing movement to train law enforcement in being more aggressive in upholding these laws.

While a car crash usually happens an average of three seconds after a driver is distracted, Greenfield said one of the best solutions is to block some phone capabilities while the owner is in the driver's seat.