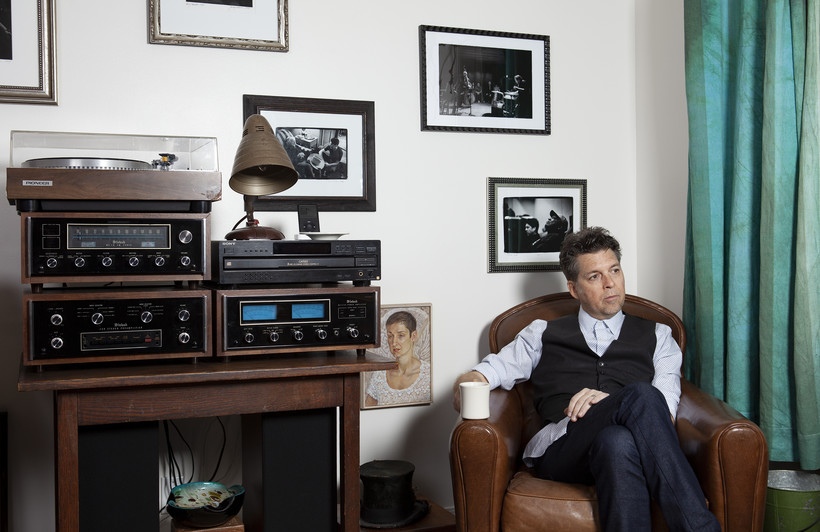 This Nov. 8, 2019 photo shows musician Joe Henry posing for a portrait at his home in Pasadena, Calif. to promote his new album "The Gospel According To Water." Photo by Rebecca Cabage/Invision/AP

On Nov. 15, 2018, singer-songwriter Joe Henry got a phone call none of us ever want to get. He had stage 4 prostate cancer. The news sent him reeling, and "set into motion many blessings and positive shifts in my life, as well as an unprecedented songwriting flurry," he told WPR's "BETA." The result is the release of his 15th album titled "The Gospel According to Water."

"With only a handful of friends playing in support, I entered the studio and tore through these songs with determination and abandon, then went home. I had let nothing clutter or distract me from the essential and true heart of these songs; and upon waking the morning after, I listened and understood that something had transpired that was more than I’d bargained for; that the songs as articulated had sparked an ember that somehow remained bright and alive before me, moving beyond my expectations," he said.

Of the 13 songs on the album, he wrote 11 of them after learning he had cancer. The other two songs were written in Ireland a few weeks before he got the news.

"Those songs seem to be just as aware in a way as the songs that came just after my diagnosis," he said. "Though they have all grown out of darkness, I don’t believe any of these songs themselves to be 'dark' in nature, nor about the circumstance that promoted their discovery. In them, I hear deep gratitude and compassion toward the self that I don’t always possess, an optimism I did not know I’d allowed to flourish."

"The Gospel According to Water" was recorded over two days last summer, which isn’t a lot of time to produce a fully-realized album. But that process contributed to the sound the songs required.

"These recordings are raw and wiry and spare because the songs insisted they be. But I believe them to be as wholly realized — as 'produced' — as anything I’ve touched, as well as being deeply and fundamentally romantic: in love with life, even when that life flounders and threatens to disappear; lustfully aglow, not in spite of the storm but because of one."

The lyrics on "The Gospel According to Water" are rich and complex, which some listeners struggle with and find confusing.

To that criticism, Henry said: "Our culture contemporarily, is not taught to engage with poetry. We’re told that poetry is difficult, we’re taught that it’s not for everybody, that the hallmark of poetry is that it will make no sense to you. If I’m writing songs and coming out of that tradition of using words to create atmosphere, to abstract things, not explain things, many listeners have this idea that you’re already decoding something by putting it into words. You’re already breaking down experience and explaining it. But if you are actually using words to paint with and to create shadow and to remind everyone listening that there’s a greater mystery at play, people might find it difficult because, as a culture, we’re not taught anymore to engage with that kind of language."

He added, "I’m not trying to be difficult, but I’m delighted when a phrase appears that I don’t really know what it means, and I know that even if I can’t explain it, I can hear immediately when I write it that it’s true."

Don’t think, though, that this is an album about Henry's struggle with cancer, which is now in remission. As he writes in the liner notes, "Where a song comes from is not where a song is."

All of the songs on the album grew out of the experience of being diagnosed with cancer, but he said, "none of these songs are about cancer."

"I would never write a song about cancer; it doesn’t interest me — my reluctance to share my diagnosis was not about fear about my privacy. I don’t want anyone, if they know that, to try to hear that song only that way. I think it’s really limiting sometimes for people to know where a song came from because they're tempted to think that’s the only experience they can have. If a listener is only thinking about what my experience was writing it, then the song didn’t happen. The song is not viable, and it’s not flexible. It’s not standing up to the mystery of that tradition. It’s getting nailed to the floor. That’s not where music lives."

"The Gospel According to Water" is an album that has depth and a fullness that isn't a result of production value, but rather, it's a result of understatement. There is space in this record, and that space helps to create a focus on the song lyrics and the sparse piano and reed accompaniment. Henry said the space in the music is a result of his acknowledgment of silence and the power listening to it can bring.

"I became aware, especially at night, that the silence I was hearing was not just a void of sound, that silence itself had a deep character that wasn’t fragile. The random sound of a train passing in the night didn’t destroy silence; it just punctuated it, letting me know something about its depth," he said. "It had its own integrity in the same way that peace is not just the absence of violence. Peace is a decision, and it’s something on its own that needs to be nurtured and recognized. Silence is not just absence, silence is a quality and a character that is really powerful."

Ultimately, in the making of "The Gospel According to Water," Henry has taken personal tragedy and created a poetic and life-affirming group of songs that shine with new meaning the more you listen.