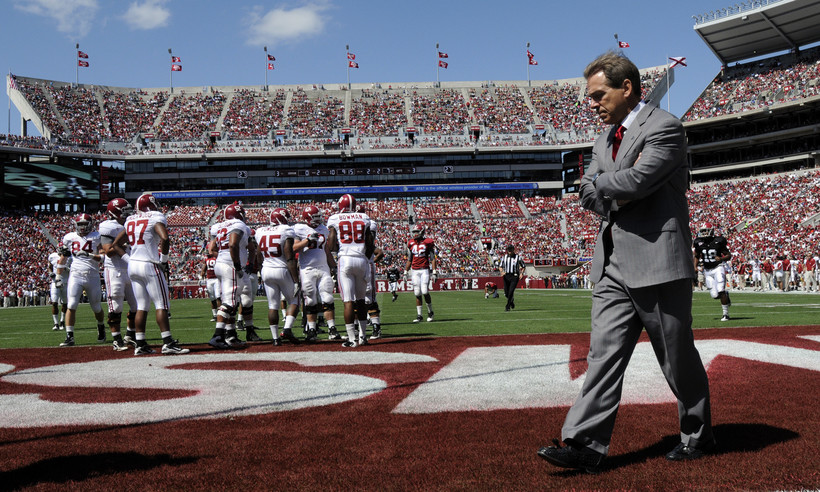 Salaries Have Doubled On Average Over The Past Decade
By Scottie Lee Meyers
Share:

College football coaches salaries have exploded over the last decade — something that a Pulitzer Prize winning journalist says speaks to how universities have turned their athletic departments into commercial enterprises and abandoned the academic missions of their schools.

In the last 10 years, college football coaches have doubled what they earn on average, going from about $1 million to a little more than $2 million annually, according to USA Today. Alabama’s Nick Saban’s $7.3 million paycheck is the highest in the country. About 10 coaches now earn an average of roughly $5 million.

Gilbert Gaul, author of "Billion-Dollar Ball: A Journey Through The Big Money Culture Of College Football," believes the increasing salaries show that most college-football programs now operate outside the schools that chartered them.

It's a change that Gaul says corresponds with the monetization of college football, beginning in the mid-1980s. Athletic directors began to leverage the demand of the sport to charge higher ticket prices, sign lucrative television deals and accept an abundance of corporate money.

"They figured out how to make an extraordinary amount of money," said Gaul. "And as they did, the coaches, not surprisingly, said, ’You know what, we want a larger slice of the pie.'"

Gaul said it's hard to justify the salaries if schools insist that college sports are still part of an educational experience and not a commercial operation. However, he said those who do justify the salaries typically argue that the coaches help generate money to the athletic departments to offer other less-popular sports.

"At a school like Wisconsin, probably in the neighborhood of 50 and 75 percent of all the revenue that comes into the athletic department comes from its football program. So it's a business justification, which really has nothing to do with the education," Gaul said.

A minority of college administrators, including UW-Madison Chancellor Rebecca Blank, have called for salary caps for college coaches. But Gaul said "there’s no chance of that happening any time soon," adding that the revenue stream model is too powerful. He did add, however, that it could be challenge 10 years from now if sentiments about whether college athletes should be paid change.