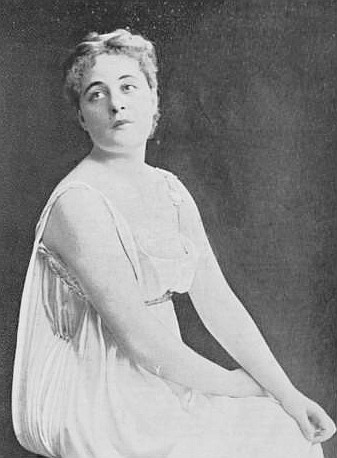 On a summer evening in 1887 Jules Massenet was about to escape from a tedious party when a young American woman approached him.  She would soon make her mark on his personal life and his career.

Her name was Sibyl Sanderson.  She was a 22-year-old heiress from Sacramento, California and extremely beautiful.  She was eager to become an opera singer and had studied with a prominent teacher. She asked if Massenet would be willing to hear her sing.

Never one to turn his back on beauty, Massenet agreed.  He accompanied Sibyl as she sang the aria of the Queen of the Night from Mozart's opera The Magic Flute.  Massenet found her voice thrilling. It ranged from lower to upper G, three octaves at both its loudest and softest. "I was thunderstruck," Massenet said later.  "I was amazed, bedazzled, overwhelmed."  He added, "I have to say that combined with such a rare voice I perceived intelligence, inspiration and personality reflected in her wonderful appearance--crucial qualities on the stage."

The morning after his encounter with Sibyl, Massenet’s publisher asked him to write an opera for the upcoming Paris Exposition.  After glancing at the libretto, Massenet declared that he had just the soprano to sing the lead role of Esclarmonde.

Massenet labored intensely on the opera for two years, determined to produce his best work for Sibyl.  They were years of doubts and difficulties for Sibyl, for Massenet--and for his wife.  But when the opera was finally finished, Massenet was so pleased with it that he asked Sibyl to add her signature to his on the last page of the manuscript.

[The composer left nothing to chance and supervised every detail of the production.  He gave 22 rehearsals with the singers and 57 rehearsals onstage.  He suffered a nervous breakdown.]