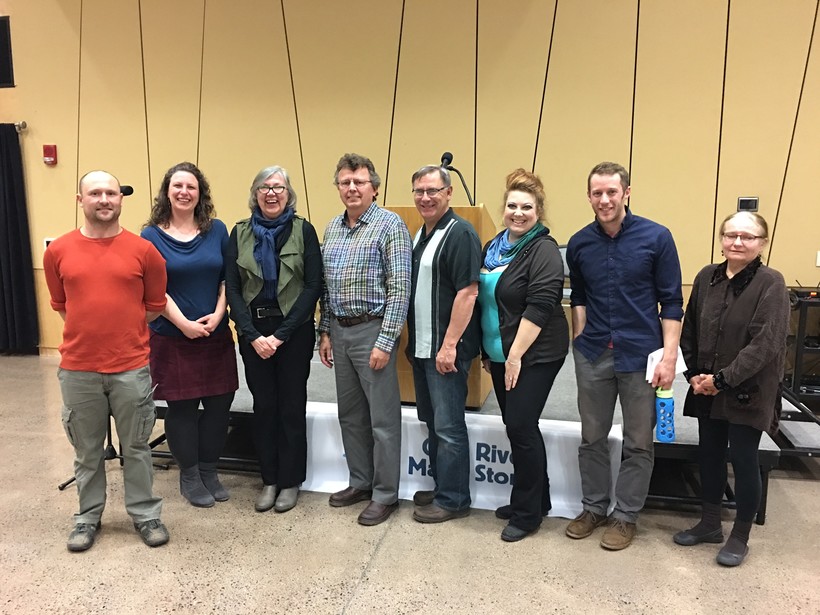 WPR Presents "One River, Many Stories"

The late Wisconsin Public Radio reporter -- Mike Simonson -- inspired this program and public reading as a part of the “One River, Many Stories” project.

“One River, Many Stories” began when Perfect Duluth Day President Paul Lundgren suggested honoring Mike’s memory and his legacy of journalism in northern Wisconsin by telling stories about the St. Louis River, its community and its people.

Lundgren partnered with University of Minnesota Duluth journalism professor John Hatcher and others to fund a project to invite media outlets across the Twin Ports to feature stories over the course of one month about river.

The Knight Foundation Fund of the Duluth Superior Area Community Foundation provided funding to support this event and others through this media collaboration project.

So, why the St. Louis River you ask? As Paul tells it, Mike shared plans for his retirement in their last conversation together. Those plans included writing a radio documentary about the St. Louis River. Unfortunately, Mike died a short time later in October 2014.

Many of Mike’s students and colleagues continue his legacy through their tireless dedication to telling stories about the people and places of this region.

Mike’s widow, Jennifer Simonson, can tell you about how much he loved the river. They often invited friends to take boat rides with them on Stryker Bay near their home in West Duluth.

We invite you to sit back and listen to the stories and poems from those who have been willing to share their thoughts, feelings and experiences about the St. Louis River.

I paddled the canoe

is the shape of Lake Superior

The river spreads out beneath the concrete deck of the Bong Bridge. A flat plain of decaying ice extends from the Minnesota riverbank to the wooded Wisconsin shore looming...

Breath From This Body of Water

A bed for the beavers and ducks and geese.

Refreshing for the deer.

A bird's eye view will get you to her deep blue soul.

The scene was familiar and foreign all at once. It felt like we were floating in a parallel universe. The river began to accelerate drawing us towards a massive wave, easily 25 feet tall. The...

I am a buoy in the river

I was born in another language

in my mother's tongue

Filling In The Blanks

I spend a lot of time thinking about rivers.

Cascading tributaries splitting through the bedrock of the north shore awake in me a sense of timelessness. Spawning fish hurling their lithe...

The blood of Lake Superior

stagnant swamps where we

we return to cascading bronze ribbons

My first glimpse of the St. Louis River came in 1963, while on a family vacation. Dad and I shared a love of the Great Lakes as well as a keen interest in all cargo carrying vessels....

My words smell of rain

I draw them from headwaters

Eleven-year-old Theo sits in a wheelchair in front of his bedroom window, drawing the suspension cables hung in groups of four that hold up the roadway of the Blatnick Bridge. Theo doesn’t...

I am the quiet, hard-working one.
My sister gets all the attention.
She is larger than life, loud, showy.
I am slender, forgotten, kind to animals.

An Epic Voyage To Whiteside Island

The St. Louis River, on its meandering course, drains 3,634 square miles of watershed from within 6 counties and two states. It’s a fast-mover with a big job to do, serving as the...

The auger takes a tentative bite into the red soil. Twisting the T-handle, there is resistance and grittiness, proof of the chunky nature of what lies below. On this gray fall afternoon...

Resting our feet upon rocks; warming against open flame.

on calm river below.