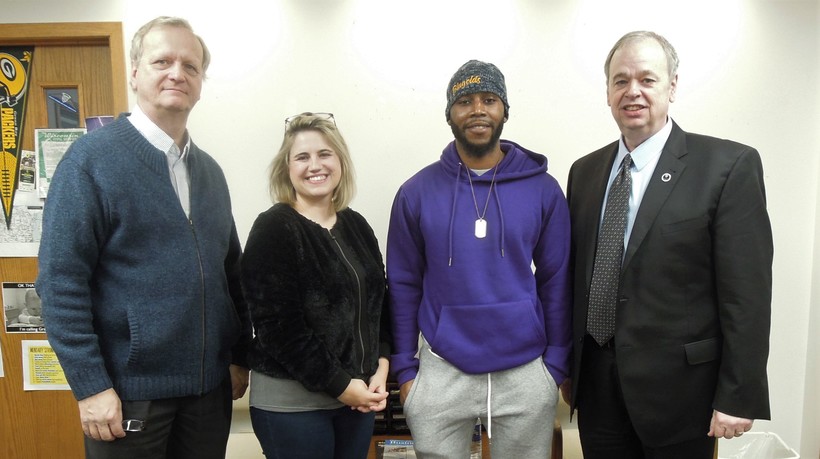 This comes six days after a social media post showed members of the football team engaging in a conversation that targeted the school's Black Male Empowerment (BME) organization and depicted a picture of a burning cross with Klansmen in the background.

The student-led government organization will vote on the resolution Monday evening.

The posts at the center of the conversation involve five UW-Eau Claire football players who have since been suspended from the team. An investigation through the Dean of Students Office is ongoing.

Without identifying specific penalties, the Student Senate's resolution says the members of the football team who participated in the conversation were "directly inciting violence through racist discourse." The resolution recognizes the remarks made by the students could have a lasting effect on all members of minority groups on campus.

Student body president Charlie Johnson, a senior, said while he wasn't part of drafting the resolution, he agrees the students should be held responsible for their actions. He said while he would favor the expulsion or suspension of these students, he admits that's unlikely.

"The idea of expulsion or suspension probably wouldn't hold up in a court of law, and at the same time, is expulsion teaching these individuals something valuable that they can take away from this?" he asked.

In a Monday conversation on WPR's regional show "The West Side," UW-Eau Claire chancellor Jim Schmidt said learning about this post, "took all of the oxygen out of the room."

He said steps have been taken to assuage the effect this incident has had, particularly on minority students on campus. In addition to calling for an investigation, Schmidt said he's suspended all unsupervised university social media groups.

Schmidt said the Dean's Office expects to be finished with the investigation sometime this week.

"(The Dean of Students) has stated that not only will he complete the investigation, but he will have met with the students who've been accused and appropriate sanctions will be placed on them before Thanksgiving," Schmidt said.

Although initially a private Snapchat conversation, the exchange was made public by Jalen Thomas, a member of BME who felt the community at large should be aware that these conversations were taking place. Lewis Balom, president of BME, said the purpose of releasing photos of the Snapchats wasn't to secure sanctions, consequences or punishment. Rather, he said the group is frustrated that incidents like this keep happening. He said the group wants to see long-term changes made, particularly regarding hiring faculty and staff who can help shape conversations regarding race.

"We're going to continue to fight because we want to see progress, long after we're gone," Balom said. "My members, we just want long-term justice, that's all."

Selika Ducksworth-Lawton, a professor of history at UW-Eau Claire, said on "The West Side" that free speech doesn't protect the students' posts, because the constitutional right doesn't protect threats. She pointed specifically to one of the comments that read, "Honestly, just find someone who doesn't have the same views as you or looks a little different and burn them."

"This is not Martin Luther King's civil rights movement anymore," she said. "It's civil rights 2.0. We are citizens, born and naturalized here. These are our rights. All we want is that they are enforced."

The Student Senate meets at 6 p.m. in the Dakota Ballroom inside of the Davies Student Center in Eau Claire. Members from the public will be able to share their viewpoints with the student senators during an open forum near the start of the meeting. For those unable to make it who want to share their opinions, email Johnson at johsoch0968@uwec.edu.