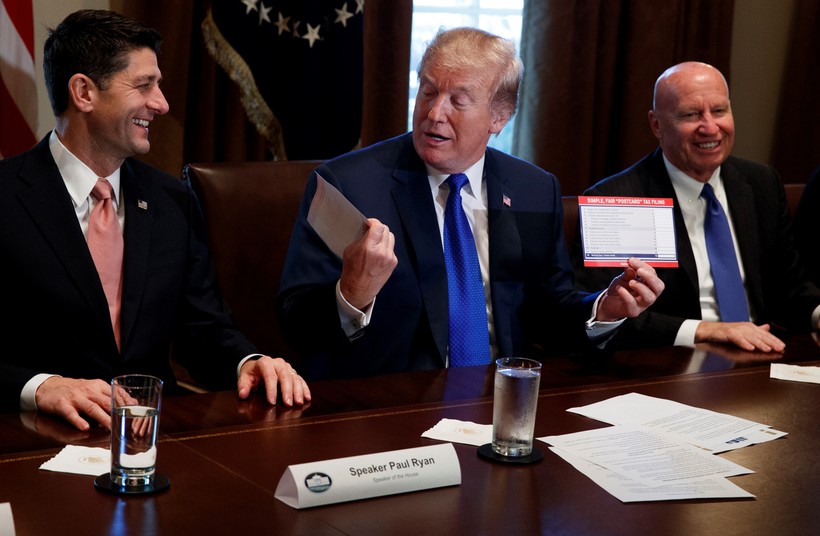 President Donald Trump holds an example of what a new tax form may look like during a meeting on tax policy with Republican lawmakers in the Cabinet Room of the White House, Thursday, Nov. 2, 2017, in Washington, with House Speaker Paul Ryan, R-Wis., and Chairman of the House Ways and Means Committee Rep. Kevin Brady, R-Texas, right. Evan Vucci/AP Photo

Terror in Manhattan, a revamp of the tax code, ending Wisconsin’s mining moratorium and more. We discuss the top state and national political stories during the Week in Review.

President Donald Trump called for the death penalty for the suspect in Tuesday’s deadly truck attack in New York City. Eight people were killed after authorities say Sayfullo Saipov, a 29-year-old immigrant from Uzbekistan, drove a rental truck into a crowd of people on a bike path. Investigators say he was inspired by Islamic State.

Under a House Republican plan, the corporate tax rate would be slashed from 35 percent to 20 percent, the number of tax brackets would be reduced from seven to four, the standard deduction would be nearly doubled and the child tax credit would rise by $600. The deduction for state income taxes would be eliminated and the property tax deduction would be capped at $10,000. Trump said on Tuesday that he wants to sign a tax bill by Christmas.

What’s your reaction to the Manhattan truck attack? Do you generally support or oppose the House Republicans’ tax reform plan? Should Wisconsin undo its moratorium on sulfide mining or is it necessary to protect the environment? Which other political story do you want to discuss? Let us know at 1-800-642-1234 or ideas@wpr.org. You can also tweet us @wprmornings or post on the Ideas Network Facebook page.