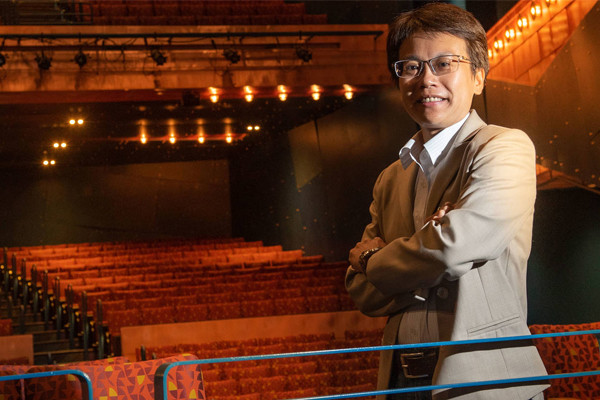 Composer and Associate Professor Chia-Yu Hsu standing in the RCU Theatre at the Pablo Center at the Confluence in Eau Claire. Photo courtesy of the University of Wisconsin-Eau Claire.

Al Ross visits with Chia-Yu Hsu, associate professor of composition at the University of Wisconsin-Eau Claire Department of Music. The show also features interviews with cast members of a musical opening at the Heyde Center in Chippewa Falls, the director of a comedy opening at the Grand Theatre in Eau Claire and the editor of the Big River Magazine of Winona.

Hsu recently won top honors in the “Women Composers'' Competition at femfestival in Florence, Italy for her composition “EC Sketches.” The piece, which is the last movement she originally penned for the opening of the Pablo Center at the Confluence and performed by the Eau Claire Chamber Orchestra, was performed at the festival. She and Ross will talk about the experience and the advancement of female composers.

“Guys on Ice – The Ice Fishing Musical” returns to the Heyde Center in Chippewa Falls, opening Jan. 11. Ross invites cast member Tim Danielson, who along with four brothers brings to life the unique experience of spending time around The Wishing Hole. They will sample some of the songs from the popular show that has been around since its debut at a Door County theater in 1998.

Theater talk continues with the Chippewa Valley Theatre Guild’s Bob Carr joining Ross to share details about their new show which he directs, “The Mystery of Irma Vep” opening Jan. 13 at the Grand Theatre in Eau Claire. The comedy, which “…deconstructs the horror genre with a high-camp celebration of it…” as described by playwright Charles Ludlam, was first produced off-Broadway in 1984.

Editor and Publisher of Big River Magazine Reggie McLeod shares tidbits of what’s in the January/February issue this year. Published out of Winona, the publication contains photos and writings about the upper Mississippi region and its culture. This edition talks about “Art Shanties,” on which McLoed will elaborate.