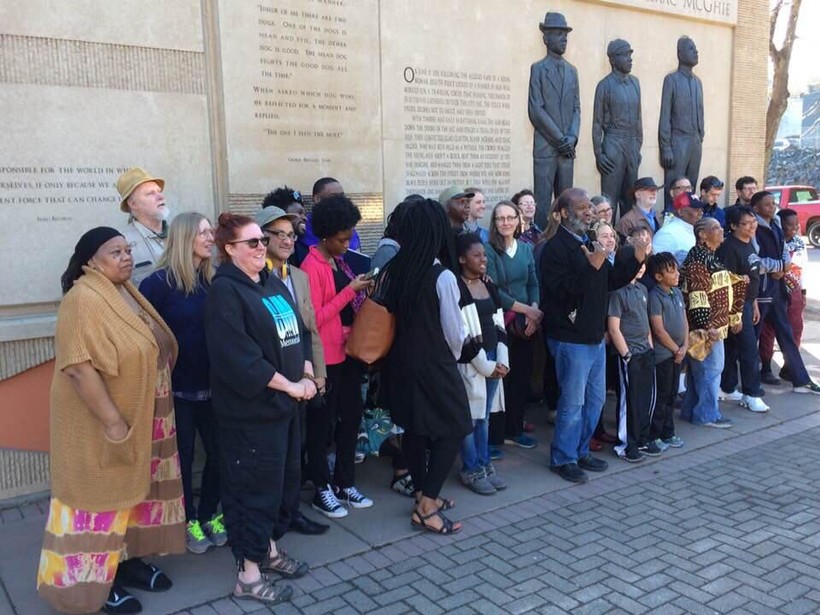 An acclaimed documentary presented by WPR’s Superior Bureau that follows nearly three dozen Twin Ports residents to the opening of the Equal Justice Initiative’s National Memorial for Peace and Justice in 2018 will be aired Friday, May 15, as part of the official observation of the 100th anniversary of the lynchings in Duluth.

“The Alabama 35,” produced by Robin Washington and Henry Banks and narrated by Banks, documents the Twin Ports delegation’s 1,223-mile bus trip to Montgomery, Ala., for the unveiling of the memorial. The group included co-founders of Duluth’s Clayton Jackson McGhie Memorial, an edifice predating the EJI’s by 15 years as the nation’s first prominent memorial of a lynching at the site of the crime. Also with them was Mike Tusken, the great nephew of the woman whose false accusation led to the city’s horrific triple lynching, and now Duluth’s police chief, whose participation symbolizes an ultimate act of healing and reconciliation.

The program, named an outstanding documentary finalist in the National Association of Black Journalists’ 2019 “Salute to Excellence” awards, had been slated for a community presentation this spring by the Clayton Jackson McGhie Memorial Committee. That event was curtailed by the Covid-19 pandemic, and is instead being rebroadcast, with an update, as a community service co-presented by WPR and CJMM.

Originally aired as part of WPR’s “People of Color,” then hosted by Banks, “The Alabama 35” is an independent production of Trains Planes & Automobiles LLC, headed by Washington, who is now host of WPR’s “Simply Superior.”