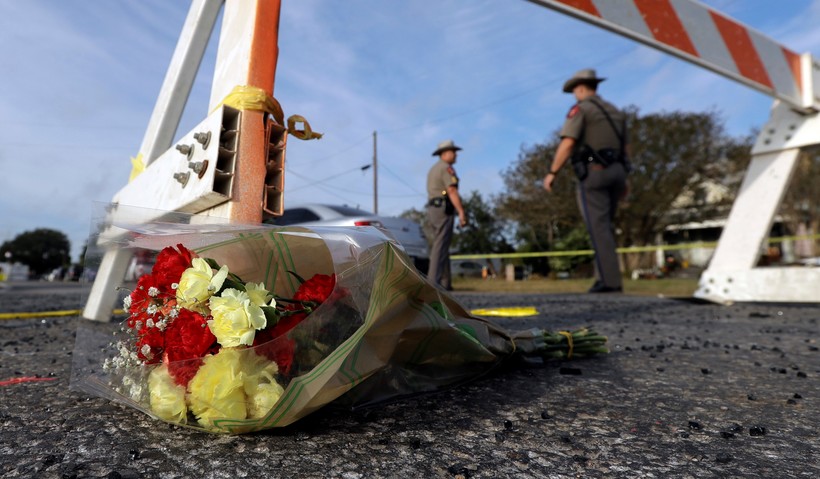 A bouquet of flowers lies at the base of a roadblock where law enforcement officials work at the scene of a shooting at the First Baptist Church of Sutherland Springs, Monday, Nov. 6, 2017, in Sutherland Springs, Texas. A man opened fire inside the church in the small South Texas community on Sunday, killing and wounding many. Eric Gay/AP Photo

President Donald Trump says the deadly mass shooting at a church outside San Antonio is “a mental health problem at the highest level” while Congressional Democrats call for more gun control measures. We discuss both sides of the gun policy debate.

At least 26 people were killed and 20 others wounded after the suspect, Devin P. Kelley, opened fire at the First Baptist Church of Sutherland Springs, Texas. Kelley was then reportedly shot by a local resident with a rifle and later died of a self-inflicted gunshot wound, according to authorities.

“Fortunately, somebody else had a gun that was shooting in the opposite direction,” Trump said Monday during a visit to Tokyo.

In a statement, Connecticut Senator Chris Murphy implored his colleagues to get serious about passing tougher gun laws.

"The terrifying fact is that no one is safe so long as Congress chooses to do absolutely nothing in the face of this epidemic. The time is now for Congress to shed its cowardly cover and do something," he said.

The Texas shooting came five weeks after 59 people were killed and more than 500 injured at a country music festival in Las Vegas.

Are incidents like the Sutherland Springs and Las Vegas shootings the price we have to pay for gun freedoms? Does America need stricter gun control measures? Are mass shootings more of a mental health or guns issue? Weigh in at 1-800-642-1234 or ideas@wpr.org. You can also tweet us @wprmornings or post on the Ideas Network Facebook page.