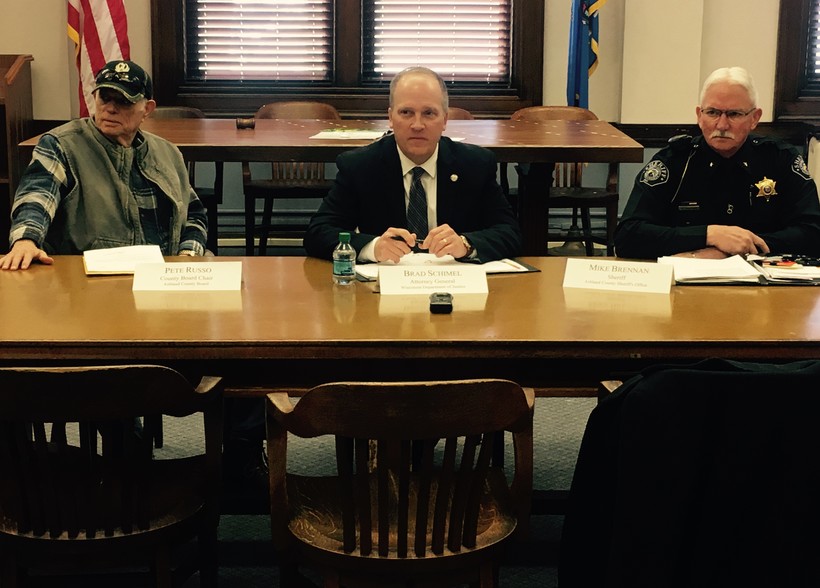 When Kelly McKnight became the Ashland County District Attorney in 2011, his office filed 122 felonies for the whole year. Just this week, McKnight said he filed his 83rd felony for 2018.

The rise of meth use in recent years was at the heart of discussion during an Ashland County law enforcement roundtable session with Wisconsin Attorney General Brad Schimel this week. McKnight said the number of people who have been caught using or holding meth is the main factor in his growing caseload, and it’s the same story any time they deal with opioids.

“Whether it’s oxycontin or hydrocodone in opioid pill form or whether it’s heroin or fentanyl, which we’re seeing an increase in,” he said.

Meth is also behind a growing number of child protection cases in the county, according to Terry Barningham, director of Ashland County Health and Human Services.

“Almost all of the reports we’re receiving now, we’re screening in and they’re serious. I think the amount of children in placement has almost doubled from a year ago,” she said. “The majority of those cases are all drug-related.”

The cost to the county for placing children in out-of-home care has nearly doubled from $405,420 in 2016 to $720,909 last year. Barningham said parents will often seek treatment after a child is removed from the home, but she said it’s not long before they fall off their radar. “They will disappear. We know they’re using again. Some parents we can’t even locate,” she said. “They just disappear for months on end so then you can’t do any of the work to try to make them better parents so you can reunite.”

Barningham said parents who take part in the county’s drug treatment court have more supervision and are often more successful. Nationwide, average success rates have ranged from 50 to 75 percent, according to the National Association of Drug Court Professionals. McKnight said their drug court mirrors the national average with meth as the primary drug of choice for 18 of their 25 active participants. However, he said even successful graduates have ended up back in the courtroom.

“They just seem to just keep coming back,” he said.

“We’ve seen many, many times – talk about treatment – people who have gone into treatment for 30, 45, 60 days,” he said. “They come out, and I would say the vast majority are reusing or being charged again within a very short time – week to a month – because they’re using again.”

Drug abuse has stressed the county’s ability to house offenders. Brennan said they’re placing eight to 10 people in other counties because of capacity and facility limitations at the jail. On average, he said they house 53 people with another 21 on electronic monitoring.

“Why are we not increasing the school day by 15 minutes and doing nothing but prevention?” he said. “I realize it costs money, but like Sheriff Brennan said this is a generational thing….What they’re seeing in their homes - dirty diapers laying on the floor, needles laying around, meth pipes hanging out - that’s normal to them.”

Barningham said the Chequamegon Coalition on Emerging Drugs has been examining ways to prevent drug use.

“We’ve been looking into mentoring programs, working with the schools on some of their programs that they’re using with the AWARE grant and looking actively for grants because we don’t have any funding,” she said. “All of our funding is going to put out the fires we currently have.”

“We are playing games with the budget,” he said. “We’re borrowing and raising our debt levy service.”

Ashland County Administrator Jeff Beirl and others take part in a discussion with the Wisconsin Attorney General about impacts of drug abuse in the county.Danielle Kaeding/WPR

This month, the Ashland County Board approved a resolution to seek a $1 million increase in the county’s operating levy. Beirl said they’ll put a referendum before voters for their approval in August. Even if voters sign off on it, he said the majority of that money would only go to cover the mounting costs now facing the county due largely to drug abuse.

Schimel said he’s hearing similar stories during visits with counties across the state.

Wisconsin’s Attorney General said there needs to be more funding and resources for early intervention and prevention efforts to save money down the road.

“It is going to take an investment, and that’s the drum I’ve been beating,” he said. “We have to recognize that prevention dollars are a good investment.”

Around $223,000 each will go to Ashland and Bayfield counties to assist their alcohol and drug courts with alternatives to incarceration, according to the Wisconsin Department of Justice.