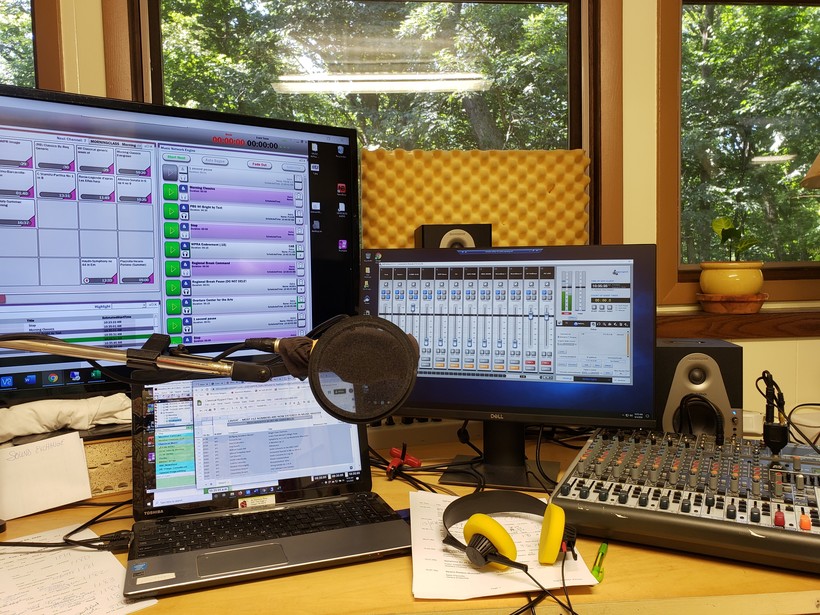 Behind the Scenes: Broadcasting from Home in 2020

I'm barefoot, sitting cross-legged in a pair of shorts and just switched a load of laundry from the washer to the dryer. The windows are open and squirrels are romping in the trees overhead. But I am at work.

You may hear me hosting WPR's "Morning Classics" every weekday, but I'm not broadcasting from the WPR studios in Vilas Hall on the campus of the University of Wisconsin-Madison. Instead, I am coming to you from my home, about 15 miles outside of the city and close to my beloved Badger State Trail.

Working remotely because of the ongoing COVID-19 pandemic has completely transformed my workflow, especially how I audition and broadcast music.

In February and March, we thought being safe meant sanitizing everything we touched in the broadcast studios between every shift: the computer keyboard, CD players, chair, mic boom and door handles. We even wiped down every single CD jewel case.

Even so, the hosts were still sharing the same mic, enunciating words from mouths placed a scant 3 or 4 inches away. Not good. And the engineers weren't thrilled at the idea of exposing the expensive microphone and its screen to a wet, chemical-laden cloth over and over.

This led to the decision to have me broadcast from home. But first, a few things had to change for handling music. Before the pandemic hit, I'd simply walk down the hall and find CDs to audition from the music library. These were aired directly from CD players in the studio (with an occasional LP on the turntable.) This isn't an option for remote broadcasting.

Nowadays while programming, I visit YouTube and other websites to hear pieces and performances I'm considering for "Morning Classics." Sometimes, I can't find the exact recording online and have to make a judgement about a new piece based on shaky videos of high school orchestras — at least I can get the feel of the music! Once selected for airplay, every single piece has to be ripped (AKA digitized), assigned a file number and saved onto a secure server on the UW-Madison campus. This is enabled through a Virtual Private Network (VPN) connection.

Once a week, I travel to campus and carry in a backpack full of CDs. I unload and sanitize them and then load up a new week’s worth and take them home to digitize. I also water a few office plants and hope to run into some colleagues in person. (That always makes my day!)

Once the music files are ripped and saved onto the server, I then import them into our broadcasting software system. This process also requires a VPN and some special software that enables control over the studio computers at the station. (Sometimes when I log in, someone else is using the computer. It’s eerie to see the mouse cursor flying around when you’re not the one controlling it.)

During the importing process, I also enter metadata surrounding the piece, like its composer and the piece's title. Once that’s done, the next step is to put the music file numbers into the master database that catalogs the 120,000+ pieces of music in the WPR library.

Now, the music is ready to be shared on the air. And that’s just the advance work.

It used to be that once the show was put together, I could literally waltz into the studio about 5 minutes early, sit down across from Melissa Ingells, WPR's "Morning Edition" host and get ready for our chat. Not anymore!

From home, the preparation is substantially different and sometimes nail-biting. I start a lot earlier because there are numerous connections to get going. The first thing I do is make sure my phone is off and the windows are closed — there are lots of dogs and lawnmowers in the neighborhood. Next is logging on to the VPN, followed by establishing four separate remote connections: the virtual control board, the broadcast software control system, the program for creating and reading scripts, and the music database, which has the playlist for the day. I also log in to Slack, the station's instant messaging program, where I can see if there are tech issues, and where I can get help quickly if needed.

I open browser windows for time.gov, the National Weather Service, the Wisconsin temperature map, Twitter, an NPR breaking news site, the back-up control board, email and the upcoming program notes.

Juggling all of these connections remotely means a lot of gear, screens and cables. I’m connected via ethernet to a unit that routes my voice directly to the station’s broadcast equipment, but it has a loud fan, so I've rigged up some towels, bubble wrap and foam to block that hum from bleeding into the mic. There's a second ethernet cable connected to my computer as wireless is less reliable. These cables snake down the stairs from my office to where the modem comes into the house. There are some area rugs and duct tape involved in keeping them in place.

I also have a small mixing board on my desk and two supplemental monitors, one of which is huge (and sitting on a gigantic dictionary) to accommodate the necessary system views. Just about everything I do starts with the click of the mouse, from turning up my microphone to playing an announcement. Sometimes, it's tricky getting back and forth between all the monitors quickly, and I have "lost" the cursor once or twice. The process isn't as smooth as using regular gear, but it functions remarkably well.

I keep telling myself that all this is helping with brain plasticity!

Occasionally, the technology gremlins pay a visit and one of the screens will freeze or disconnect entirely. Rarely, they all go at once. But our engineering team is simply phenomenal, and they have provided redundancies for most of the systems. With every passing week, the tech issues have been diminishing.

I couldn't be broadcasting from the sanctuary of home without an extraordinary level of support from a tireless, hardworking, very smart engineering team led by the fearless Britny Williams. They are keeping the WPR staff healthy and our listeners connected during such a challenging time. For that, I am very grateful.

Gotta run — the dryer's buzzing. Thanks for listening!

Survey: Nearly Half Of Wisconsin Manufacturers Say Business Still Down
Spring Training: After Season Shaped By Coronavirus, Brewers Prepare For More Normal 2021
Seven-Day Average Of COVID-19 Cases Remains Steady Around 630
More Than Half Of Wisconsinites Age 65 And Over Have Received First Dose Of COVID-19 Vaccine
$322M In Rental, Utility Assistance Available For Those Facing Housing Instability
More WPR News