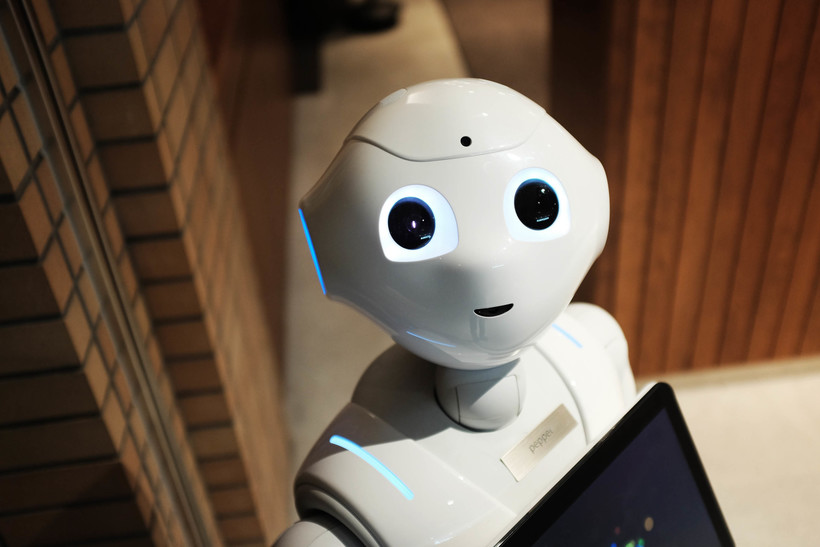 One of the more unconventional bits of worldbuilding in Alexander Weinstein’s short story collection, "Children of the New World," is a chapter composed entirely of dictionary entries defining new, everyday terms found in some not-too-distant future filled with screens projected directly onto our eyeballs, advertising based on our thoughts and monetized digital religious experiences.

But the author believes these stories are more closely rooted in today than we might realize at first glance.

"I think mostly what I was playing with and what inspired a lot of the plots of these stories is looking at what we're doing presently and then just moving it a step more absurd, going to the logical extension of what would be next," said Weinstein, speaking with Doug Gordon for "To The Best Of Our Knowledge." "What we might find mildly horrifying right now but, once we got used to it, we would totally accept it because that's pretty much how we are with technology."

Weinstein’s stories jump all over in terms of when they happen in the future and what has befallen humanity, but they all revolve around the notion of human connection and how technology tends to mediate and reshape it. The promise of the internet, said Weinstein, was a tool for uniting marginalized or small groups, for bringing together lost friends and loved ones, and creating safe communities for individuals who thought they were alone.

"The difficulty becomes that there's a way that we're also thwarted online," Weinstein said. "With online dating, somebody can fall in love. But on the flip side, it also teaches you to, like, swipe people into the trash that you don't like."

We’ve borrowed a few of Weinstein’s terms from his "New World Authorized Dictionary" and created one of our own to help guide readers through a few excerpts from his stories included below.

A family adopts a child and a robotic sibling to help raise her, but when he encounters technical difficulties, the family's subtle anthroposoulifying of the robotic helper makes the experience more painful than it needed to be.

"Here we have a world that's pretty close to our own. And the only real differences are that people are buying robotic big brothers and sisters as babysitters for their children," Weinstein said. "These can be of any nationality and any background you want — this family has seen him as their actual son. (But) they are erroneously, I think, leaning on technology as the place where they're going to find a way to stay human."

Their android son Yang soon breaks down, and as that story progresses, Weinstein taps into the tension that arises from our increasingly personal connection with the technology we embed in our daily lives. Dull exchanges with support technicians cause a cognitive dissonance as the father panics for his "son," while the tech people offer him limited and seemingly inhumane options of how to handle his breakdown.

"I do think Yang has a secret soul in there, but I don't know that that's true. I think it's just technology," Weinstein said.

Fred's EyeScreen was cluttered with fantasy sports info and EyeMails he casually tossed into the trash one by one, each with a slight twitch of his eye, only slightly disguised by his nodding to indicate feigned thought during the Wednesday meeting.

It’s a frictionless technology that appears in many fictional futures these days, but Weinstein focuses less on the magic of pervasive intuitive screens and more on the potential for horror.

"Things that for me were dystopian — EyeScreens and displays inside contact lenses — are actually happening. So a lot of these stories become prophetic in that way, which is very discouraging to me," Weinstein said.

Seemed our latest brainflea had sunk in its teeth and wasn't letting go — a particularly viral promo Quimbly dreamed up for BellBurners that projected itself into the upper right occipital quadrant beneath the eyelid, making it distracting to anyone's vision and ensuring there was no way you were going to blink that one out of your eye.

Ad technologies like those running beneath services like Gmail — which uses your private online conversations to construct relevant advertising — are only the beginning, Weinstein said. In the future, we could see marketing in much more invasive forms, based on our deepest and most private inner thoughts and fantasies. In the title story from the collection, one couple discovers the horrors of coming under assault by anthropomorphized spam in their virtual home, each scambot avatar trying to entice their virtual children.

Inner-Ear and AT&T's recent merger means good news for stockholders and good news for customers. Reports show a 12-percent increase in Inner-Ear surgery since the merger went public, and already airports and restaurants are filled with the sound of patrons togging aloud in between IT support and mojitos.

Weinstein imagines a future where even taking time to work on our personal problems comes at the expense of one-on-one conversations and relationships with others. "You know the cautionary tale is really about how much are we disappearing into our technology right now," Weinstein said.

"We use it at parties, you know, to find out where our friends be at. You turn on Winker and suddenly everyone shuts up and disappears so I can hear my bros." Like many students across American campuses, Zack has been winking-in people to share his interests. "It's a good way to meet people," Zack says. "Like, let's say I want to meet a girl that likes to mush — bam — as long as she put that in her profile, I see her."

"Things have gotten more and more strange with Snapchat and Tinder and Grindr and all the different requests we have to join this or that social network," Weinstein said. His fictional extension of how social media could be taken too far into human interaction calls to mind an episode of "Black Mirror" that explores the idea of "blocking" someone on social media in real life.

"Moksha, it turned out, wasn't bullshit. It'd just gone into hiding ever since the twenties when the U.S. cracked down on Nepali distribution. There had been nonstop busts at yoga studios and health spas in the U.S. An oxygen bar in Sedona had been found with makeshift crown plates hooked up to an old Sega Genesis console. The CIA had confiscated the equipment and sentenced the owners, a gray-haired, dreadlocked couple, to life."

"In this world, the U.S. government has cracked down on these virtual enlightenment drugs that can get you to different states of Buddhist or Sufi liberation," Weinstein explained. "And the U.S. government is cracking down on these sort of meth lab equivalences where people are cannibalizing old Genesis and Nintendo systems and creating these almost tinfoil caps that you can wear. It's very sketchy."