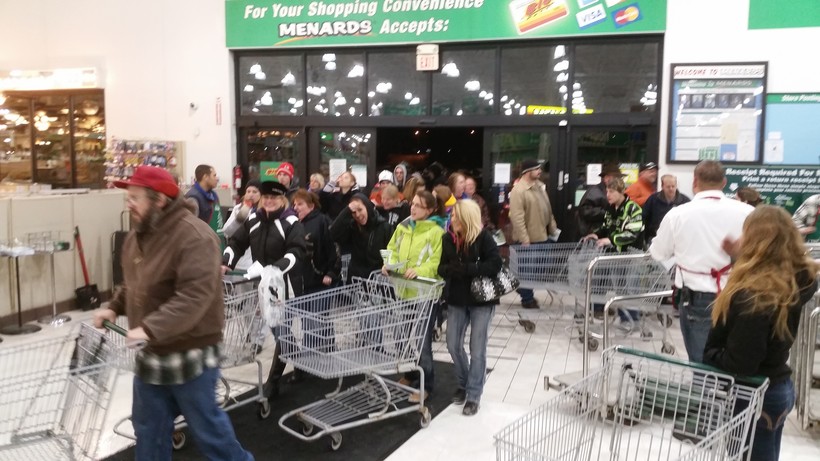 Some Stores Opened On Thanksgiving Night
By Rich Kremer
Share:

There was still some Black Friday spectacle on Friday morning in Eau Claire despite many stores offering deals on Thanksgiving.

As more retailers kick off their Black Friday sales on Thanksgiving, customers are adapting to marathon Christmas shopping.

The 6 a.m. Black Friday kickoff was a quiet one at most big-box retailers in the western Wisconsin city. Stores like Best Buy had big sales on Thanksgiving. Others, like Kohl’s and Target, stayed open throughout the night.

But outside Menard’s, a couple hundred shoppers shivered in line waiting for the doors to open.

George Reisdorff was covered in snow at the head of the line. He said he has been there for more than eight hours. He said he had several items in mind.

“An infrared heater of all the irony, a Shop-Vac, miter saw and a few other odds and ends. Christmas presents, the usual,” he said.

Reisdorff said his spending hasn't changed much from last year.  And, even though he waited all night to shop in person, he said he buys most of his gifts online.

Lexie Hendrickson, of Stanley, said she and her friends started shopping right after Thanksgiving dinner and were still at it at 6 a.m. Friday. Hendrickson said she misses the days of all stores opening on Black Friday, but they’re powering through.

“We’re going to until about noon. We got Scheel’s, Farm and Fleet, the bookstore.  We got some places that they won’t open until today.  So, we’re shopping all-nighters.  We’re professionals, we’re not amateurs,” Hendrickson said.

She said she’s planning to spend a little more money this year than she did during last year’s holiday shopping season.