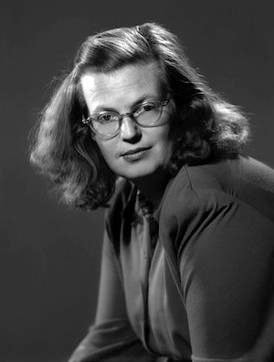 Shirley Jackson possessed a unique writing style that included the dark and disturbing,  suspenseful and sinister. She was the precursor of greats to come, such as Stephen King, Neil Gaiman and others who espoused the same genre.

One of the most influential writers of the 20th century, Shirley Jackson valued herself as much a wife (of literary critic Stanley Edgar Hyman) and mother of four, as a writer. Shirley was devoted to family life, and, yet, in a career that lasted more than 20 years, she completed seven novels, a memoir, and more than 200 short stories that appeared in literary journals, high-profile magazines like The New Yorker and many others. She is best known for her New Yorker story, The Lottery, which launched her career in horror by way of the enormous response it received from readers. Shirley’s The Haunting at Hill House is considered by many to be one of the best ghost stories ever written.

In contrast to her “Queen of Horror” moniker, Shirley was witty and funny. “The very nicest thing about being a writer,” she is quoted as saying, “is that you can afford to indulge yourself endlessly with oddness and nobody can do anything about it…..” And with so many stories to tell, Shirley didn’t limit herself to writing about the “odd”. Throughout the course of her prolific career, she wrote in many different styles. From delightfully documenting domestic life in Raising Demons and Life Among The Savages to The Bad Children, a one-act children's musical based on Hansel and Gretel to a novel about a young woman who develops four personalities after being sexually assaulted, The Bird’s Nest, Shirley defied pigeon-holing by critics.

In We Have Always Lived in the Castle, Shirley was in her element writing about murder, mystery and hauntings. Time Magazine called it one of the top ten novels of 1962. Castle was Shirley’s last published novel—three years later, well into a new novel, Come Along With Me, she died of a heart attack at the age of 48. She was still enjoying the success of Castle at the time of her death. The following year an adaptation of Castle had a short run on Broadway.

In addition to the numerous posthumous collections of her short stories, and a forthcoming book of her letters, Shirley Jackson’s legacy includes the many movies that have been produced, based on her novels. Actress Elisabeth Moss stars as Jackson in the movie, “Shirley” released this year.

WPR celebrates the 55th year since the death of Shirley Jackson with this presentation of the timeless horror classic, We Have Always Lived in the Castle.