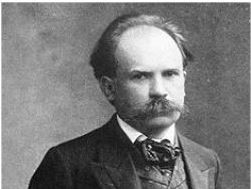 Although he was born in Glasgow of an English mother, Eugène d’Albert never considered himself an Englishman. His father, who was a ballet master in London’s King’s Theatre and at Covent Garden, was German-born, but was of French and Italian descent, and had among his forebears two eighteenth-century composers, Giuseppe Matteo Alberti and Domenico Alberti.

If young d’Albert had a constant in his life, it was probably music. His first teacher was his father, who, apparently, was quite effective because at the age of twelve the boy won a scholarship to the new National Training School for Music, where his teachers included Arthur Sullivan, who was just starting to reap the rewards of a partnership with William S. Gilbert. D’Albert became well-known as a bravura pianist and a capable composer, and by the age of seventeen was credited with writing the overture to Gilbert and Sullivan’s comic opera Patience.

During the same year, 1881, d’Albert won a scholarship that enabled him to study in Europe, where he made the acquaintance of Liszt and Brahms. Under the spell of Wagner’s Tristan and Isolde, he moved to Germany and changed his name from Eugène to Eugen. He said that one hearing of Wagner’s opera had taught him more than everything he had learned from his father or the National Training School of Music.

A year later, at eighteen, he became the youngest soloist to perform with the Vienna Philharmonic when he played his own piano concerto.

After years of international touring, d’Albert devoted more and more time to composing, and produced a total of twenty-one operas, the seventh of which, Tiefland, found a permanent place in the repertory.

In 1914, at the outbreak of World War I, d’Albert’s longstanding favoritism toward Germany made him a controversial figure in England, and he later softened some of his statements, saying with a curiously foreign syntax, “The former prejudice which I had against England, which several incidents aroused, has completely vanished since many years.”

Eugen d’Albert’s personal allegiance was also given to drifting. In 1932, having long since become a Swiss citizen, he died in Riga, Latvia, where he had gone to divorce his sixth wife.