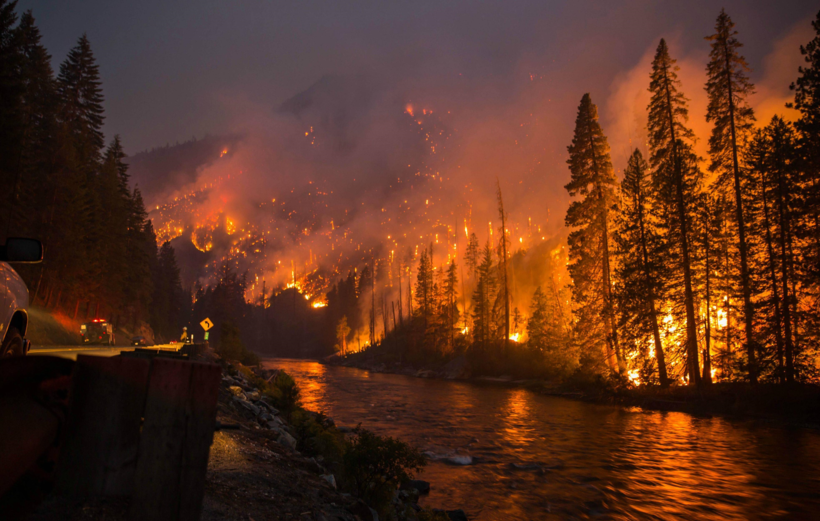 According to one analyst, climate change is major a factor in what makes blazes of the magnitude seen in the American West right now possible.

The National Interagency Fire Center reported this week that more than 28,000 firefighters and other personnel are battling wildfires in states like Washington and Oregon, with nearly 1.7 million acres on fire.

Nicky Sundt, a climate policy analyst at the World Wildlife Fund, believes that warmer temperatures are contributing to drier-than-normal grasslands and forests, making wildfires like these much more intense. According to Sundt, 7.7 million acres have burned in the U.S. so far this year with two-thirds of that in Alaska. Additionally, Canada has seen almost 15 million acres on fire.

"That’s a lot of acreage that’s burning to the north, and in those northern latitudes, particularly towards the sub-Arctic and Arctic region, you have a lot of carbon in the soil," Sundt said.  "These fires are burning down deep into what used to be frozen in some cases, and producing a tremendous amount of smoke that drifts all the way across the Atlantic Ocean into Europe and even as far as Turkey,”

In 1987, Sundt was working as a smokejumper on a number of major fires in southern Oregon. The following year, he was working in the U.S. Office of Technology Assessment on climate change and forestry. That’s when he started seeing the connection.

"The usual things that, in the past, always would cause very active fire seasons are being aggravated by higher temperatures associated with climate change," he said.

He said the higher temperatures mean snowmelts occur sooner, which in turn means that forests and grass dry out more quickly, providing plenty of fuel.

"So when you do have a fire, it’s going to tend to be larger than it otherwise would be. On top of that you have lightning — and if you get a lot of lightning on top of really dry fuels, you’ve got a serious fire situation, like we have this year," he said.

According to Sundt, the problem isn’t just in North America either. Fires in the Russian province of Siberia have burned an area larger than Alaska and Canada combined.

So what can be done to address increases in wildfire frequency and intensity? Sundt said that in the long run, energy conservation and a move away from fossil fuels can likely help reduce some effects of climate change. Over the next several decades, however, he said officials and agencies should prepare for this type of fire season to become increasingly common.