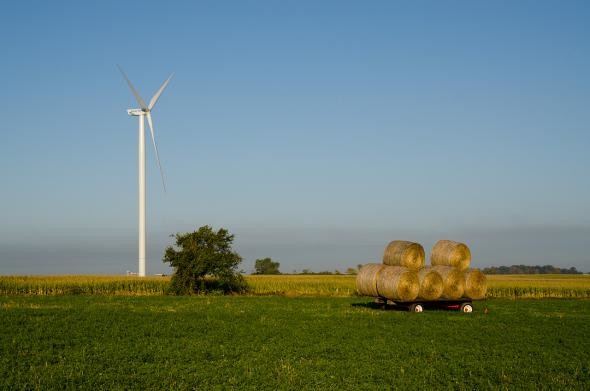 Photo of the Shirley Wind Farm in Green Bay, Wisconsin provided by ENERGY.GOV

Several Factors Explain Why Wisconsin Has Lagged Behind In Wind Energy

As other states around the Midwest have been putting resources into developing wind energy sources, Wisconsin has been slower to move. In fact, states like Iowa, Michigan and Indiana have added thousands of megawatts of wind power over the past five years while Wisconsin has gained just 17.

One factor contributing to this gap is that Wisconsin has a 10 percent renewable energy quota, and that was met in 2012, according to James Tinjum, an associate professor in the Department of Engineering Professional Development and Geological Engineering Program at the University of Wisconsin-Madison, as well as being associated with the Wisconsin Energy Institute.

Comparing Wisconsin to Iowa, Tinjum said that the average size of land parcels is smaller in Wisconsin, which means that a wind developer will need to negotiate and deal with more people and interests when it comes to siting the development.

Tinjum also explained that other states, like Iowa and Minnesota, have landscapes more adapted to wind power generation. But there is also a difference in a different kind of landscape.

"They also have a stronger political will and interest in going into renewables into the future, attracting manufacturing for renewables to the state, and meeting future environmental and climate change initiatives from the federal government," Tinjum said.

Tinjum also pointed to some local restrictions on development that are more rigorous than the state standards, which can be an obstacle to new energy operations. He said that developers can find it challenging to know which regulations with which to comply.

According to Tinjum, the larger issues with wind power, or any regulated industry, are best addressed and decided on the state level. He pointed to empirical data to be collected and considered on possible human health and environmental impacts of the placement of wind turbines.

"The state-based science is really what would drive more wind here. So, the developers know what noise restrictions they need, what set-backs they need, and then that would not be overturned or an issue at more local levels is one of the biggest things holding back additional wind in Wisconsin," Tinjum said.

While those studies haven't been done in Wisconsin, they have been done in other parts of the country and around the world. Tinjum pointed to large-scale studies done in Massachusetts, Canada, Australia and Great Britain. One advantage of these studies is to help separate actual health concerns with what is more of an annoyance.

"Around the country and the world, these basic science limits have been fairly well established on the benefits and the negatives of wind energy," Tinjum said.

While Wisconsin has been lagging behind neighboring states in the Midwest in wind power generation recently, there are signs that the trend might be changing. Tinjum said that there are at least three projects close to the development stage in the state. They include the Highland Wind Farm in St. Croix County, the EDP Renewables wind farm in LaFayette County, and Tisch Mills Wind in Kewaunee and Manitowoc counties. He said that they are on the smaller end of the spectrum of size. But even so, wind farms in that range can provide energy for more than 55,000 residential household, he said.

For wind developers looking to expand in Wisconsin, Tinjum had a few suggestions. He said that a "good neighbor" policy has been shown to ease local concerns. He has seen some wind energy developers provide free satellite or cable to area residents in case their antennas are affected, build better county roads and other infrastructure that benefits the community as a whole, or a reimbursement to the local county or township for hosting fees, in addition to paying landowners to lease the space.

"You want your landowners and your neighbors to feel good about your development," Tinjum said.