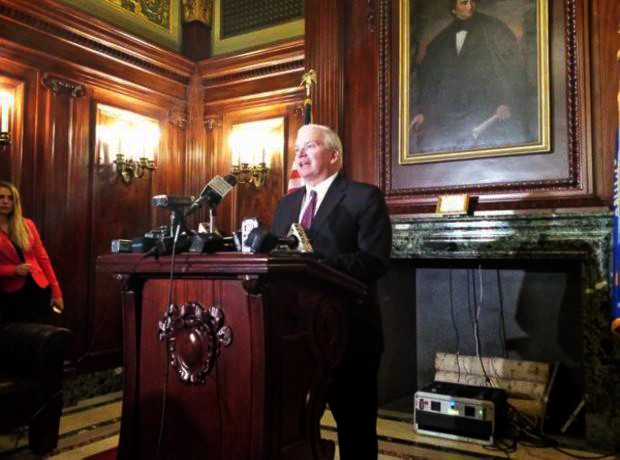 Senate Majority Leader Scott Fitzgerald speaking to reporters following the passage of his bill in the Senate.

Legislation Now Heads To Assembly, Where It's Expected To Pass
By Erik Lorernzsonn and Shawn Johnson
Share:

Republicans in the state Senate approved a right-to-work bill on Wednesday night following eight hours of debate and a second day of protests at the state Capitol.

Senate debate on the bill was occasionally disrupted by protesters shouting from the gallery throughout the afternoon. About a dozen people were removed for interrupting the proceedings.

Ultimately, at around 9:30 p.m., lawmakers passed the bill on a 17-15 vote. Sen. Jerry Petrowski, R-Marathon, joined all Democrats in the chamber in voting against the legislation.

Like most of his Republican colleagues, Petrowski did not speak, but he issued a statement calling himself a Ronald Reagan Republican, adding that, like Reagan, he was a union member for many years.

Democrats, on the other hand, did speak during the floor debate. Green Bay Sen. Dave Hansen said right to work was about increasing corporate profit.

Democrat Jon Erpenbach of Middleton said the plan was just the latest by the GOP that would reduce wages.

But Racine Republican Van Wanggaard said his southeast Wisconsin constituents need jobs and they told him they want right-to-work.

"This is important to us, we understand the philosophy of this," Van Wanggaard said.

"I mean it's going to take years, but you know, some of these major policy shifts, that's what they're about. It's about long-range kind of projections in the future," said Fitzgerald.

Most of the protesters from earlier in the day had left the Capitol by the time of the bill's passage. Nevertheless, the few that remained chanted "Shame!" at lawmakers as they exited the Senate chambers, while some began singing protest songs in the Capitol rotunda.

The bill, which would make it illegal for unions to require nonmembers to pay dues, is getting fast-tracked through the state Legislature by Republican lawmakers. The Assembly is expected to approve it next week. Gov. Scott Walker has said that he will sign the bill should it reach his desk.

Editor's Note: This story has been updated to include statements from lawmakers.