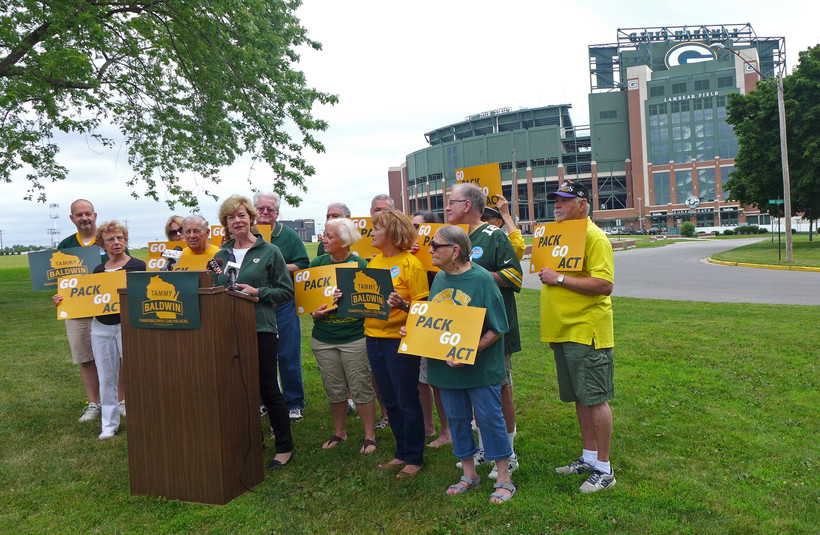 Her 'Go Pack Go' Bill Would Require Cable Companies To Provide Customers An Option To See The Games
By Patty Murray
Share:

In the shadow of Lambeau Field, Democratic U.S. Sen. Tammy Baldwin told a small group of supporters that due to broadcast rules, thousands of Green Bay Packers fans across the state are unable to regularly view the games.

"400,000 Wisconsinites are subject to arcane broadcasting rules that keep the Packers off their TV screen," she said.

For people in much of the state, especially in the city of Green Bay itself, Sunday or Monday NFL games can be viewed on cable, satellite and broadcast TV. However, Baldwin said people who live in broadcast markets that border other states, like Illinois, Minnesota, or Michigan sometimes cannot see their home team.

"Just look at last season. In week 13, the Packers were set to play a game with major playoff implications," Baldwin said, adding that fans were let down. "Especially in northwestern Wisconsin from Pierce to Douglas to Iron County, they could not find the Packers, but the Vikings were playing on their television sets."

She's hoping to change that with her new "Go Pack Go" bill.

If approved, the "Go Pack Go" bill would affect satellite and cable viewers in 13 counties. People who get their signal over the air would not be covered.

Baldwin said a similar bill was passed several years ago covering media markets in the northeastern seaboard states, such as Vermont and Massachusetts. She said customers could opt for a Wisconsin channel at no extra charge.  If they opted to have both a Wisconsin and Minnesota market, for example, they may incur a higher bill.

Green Bay resident Marge Yuenger joined Baldwin at Friday’s event and said, "Some people may think this is just about football but the Packers are more than just football here in Wisconsin."

Yuenger said the team brings a "sense of community" to the state and noted that, "In Italy, Paris and every state in the U.S. they all have places where people gather to watch the Packers. On the other hand there are thousands of Wisconsinites who don’t have Packer coverage in their homes?"

In a press release, Vukmir pointed to a similar bill by U.S. Rep. Sean Duffy.

"Wisconsinites are too smart to fall for Sen. Baldwin’s phony political games. This shows how desperate she is to win re-election," the press release said. "Baldwin can’t stand on her actual record, so she hijacked Rep. Duffy’s bill to help northern Wisconsinites view Packers games. Where was Tammy Baldwin when Duffy introduced this bill?'