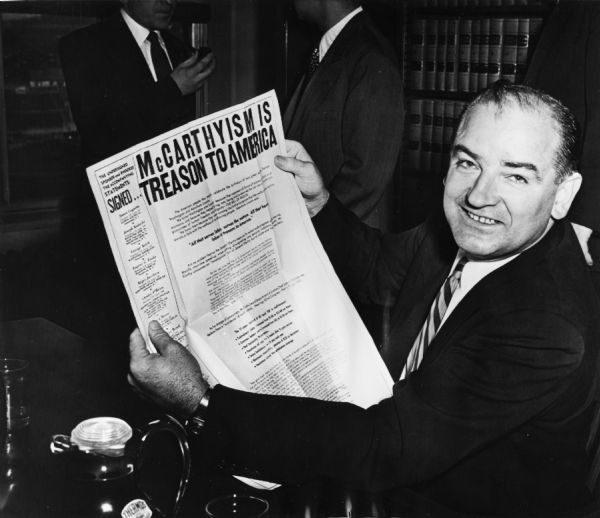 On Feb. 9, 1950, Wisconsin Sen. Joseph McCarthy burst onto the national stage with his claim to possess the names of 205 communists working for the U.S. State Department.

The Republican had been in the U.S. Senate for four years by that point and had been relatively obscure. He’d won his race in an upset against Sen. Robert La Follette Jr.

Communist expansion in eastern Europe and Korea as well as the conviction of Alger Hiss fueled American anxiety about the future. McCarthy capitalized on this fear to launch his campaign to eliminate communist infiltration of the American government.

McCarthy’s accusations prompted the Senate to form a special committee. They didn’t find much evidence to substantiate McCarthy’s charges, but McCarthy continued his campaign.

Re-elected in 1952, and as chair of the Senate Permanent Investigations Subcommittee, McCarthy took it upon himself to expose communists. More than 500 people were called for questioning before the committee. McCarthy refused to reveal his sources, claiming threats to national security. These hearings destroyed the reputations of many innocent people.

McCarthy took his accusations too far in 1954 when he accused the U.S. Army of harboring communists. The subsequent hearings, popularly known as the Army-McCarthy hearings, exposed McCarthy’s recklessness and bullying tactics. It also led to the famous lines from the Army’s lawyer, Joseph Welch, during televised hearings. As McCarthy continued his attacks, Welch interrupted him to ask, "Have you no sense of decency?"

The hearings permanently damaged McCarthy’s reputation and resulted in his censure by the Senate for "conduct unbecoming a senator."