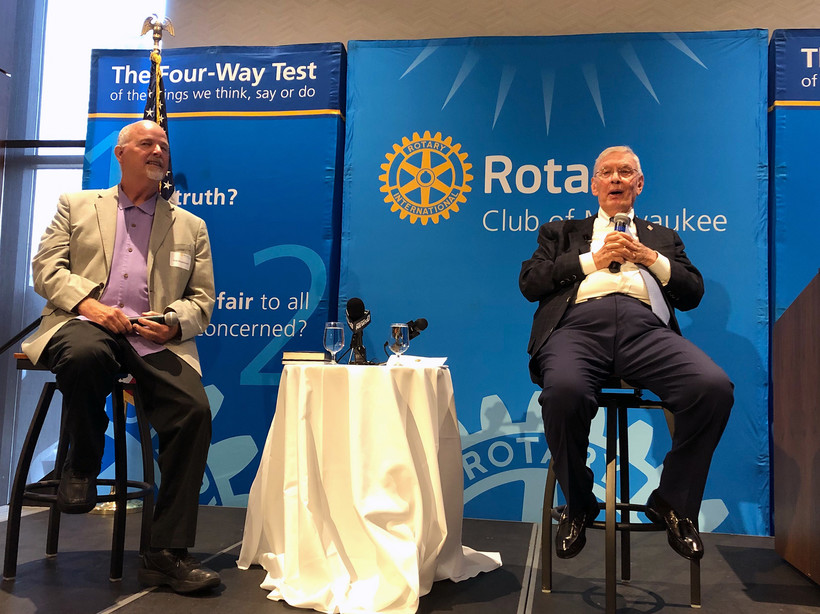 Bud Selig, the long-serving commissioner of Major League Baseball, says people can be critical, but Miller Park was built exactly where it should be — in the heart of Milwaukee — and it ended up being one of the greatest ballparks in baseball.

Selig, a Milwaukee native, who has been credited with bringing baseball back to the city after the Braves left town, was interviewed by long-time Milwaukee Journal Sentinel Brewers and MLB reporter Tom Haudricourt Tuesday. The event was at the War Memorial hosted by the Rotary Club of Milwaukee and the Milwaukee Press Club.

Much of the discussion was about Selig’s book, "For the Good of the Game," published this month and co-written with sports journalist Phil Rogers.

Selig, who retired from baseball in 2015, led a years-long effort the 1990s to build the $295 million stadium to replace Milwaukee County Stadium. A political fight ultimately resulted in the state agreeing to funding the majority of the construction through a new, five-county sales tax that will end in March 2020.

"We needed a new ballpark and we couldn’t compete," Selig recalled. "We had a lot of starts, a lot of stops and a lot of heartache. This was not a team that was going to move. On the contrary. This was a team trying to stay and we put up with some, what I describe as Machiavellian behavior, which is surprising."

Selig was the owner and team president of the Milwaukee Brewers until being named acting commissioner of baseball in 1992, and official commissioner in 1998. He was inducted into the Baseball Hall of Fame in 2017.

In the days before Selig’s book was released, Thompson and Norquist responded to his criticism via the Milwaukee Business Journal.

"He’s the one trying to make himself out to be a hero. But he was anything but a hero. He didn’t pay a dime for it. The taxpayers built that stadium," Thompson told the Business Journal.

Norquist told the publication he would rather be criticized by Selig than praised by him.

When asked about the criticism from Thompson and Norquist, Selig said he has never appreciated the way the process went down.

"Miller sponsored (the stadium) but at that location," Selig said. "There was no downtown site. Other teams come here. They see these 15,000 parking spaces, they wonder what the controversy was about."

Selig says if the stadium isn’t good for another 30 to 35 years he’ll be disappointed.

While Milwaukee is one of the smallest markets in Major League Baseball, it attracts 34,000 fans a game, on average, Haudricourt said.

"We’re outdrawing teams like Cleveland and the White Sox, in this little tiny burg of Milwaukee," Haudricourt said.