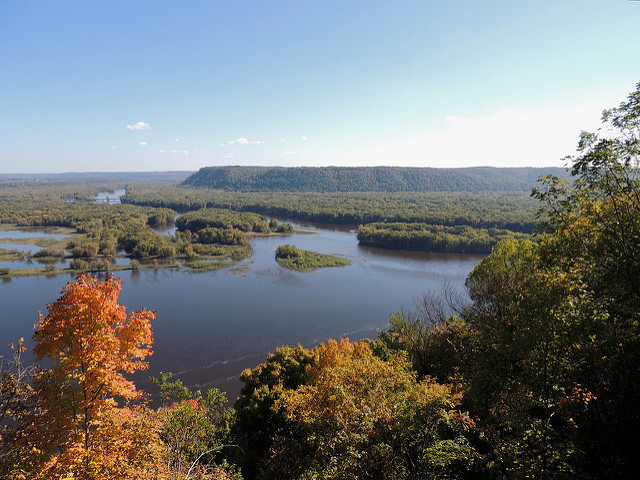 After prolonged flooding along the Mississippi River this spring, current and former federal officials warn more resources and creative solutions are needed for future management of the river.

Steve Buan is hydrologist in charge at the National Oceanic and Atmospheric Administration’s (NOAA) North Central River Forecast Center. During a recent webinar held by advocacy group America’s Watershed Initiative, Buan said 2018 had the highest annual precipitation since records started in 1895, coming in at an average of 48 inches across the basin.

It’s part of what led to continuing flooding on the Mississippi River this spring, which halted commercial navigation and broke the record in St. Paul, Minnesota for most continuous days above the flood stage.

While the river basin has seen high precipitation in years before, Buan said the average yearly precipitation has been increasing since the late 1970s. He points to the 25-year moving average for the Mississippi River Basin.

"From 1895 through the late 1970s, every time you look back 25 years, you had about the same amount of average precipitation, that being about 38 inches (per year)," Buan said. "Once we got to the late 70s into the early 80s, we start looking back and we’re adding wetter years than we’re taking off." 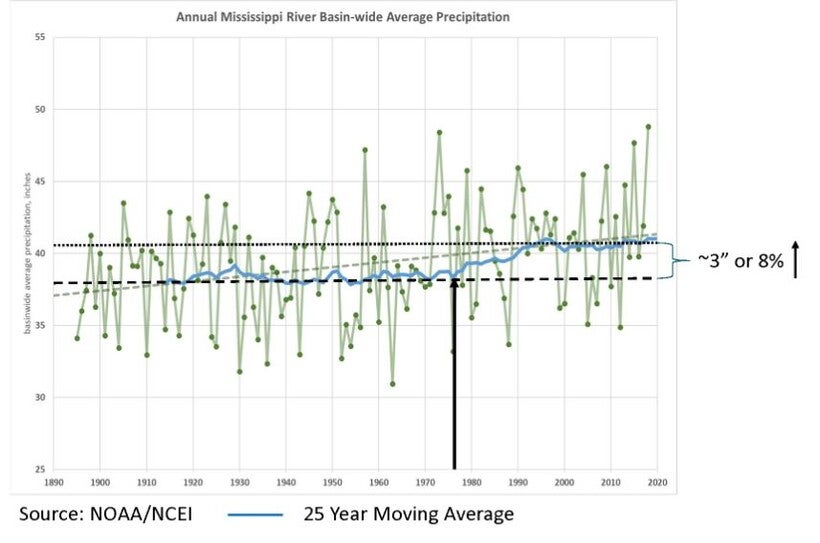 Buan said the 25-year average is now around 41 inches every year. And he said the 3-inch difference has a huge impact on the amount of water moving through the 1.2 million-square-mile river basin.

He said the Mississippi River is "seeking a new normal" to keep up with more water flowing through the river and fewer periods of low water levels.

Retired Maj. Gen. Michael Walsh of the U.S. Army Corps of Engineers said communities and agencies on the river need to do the same.

During the webinar, Walsh said local, state and federal officials need to develop a shared vision for future management of the Mississippi River.

He said other parts of the country are already doing similar work, responding to rising sea levels in Miami and hurricanes like Harvey in Texas and Sandy on the East Coast. And he said they’re getting federal money to support the initiatives.

"I get a little concerned that the center part of our country is going to be the last at the trough of funding and the capability of people to think big will all go into the coastal challenges that we see and hear a lot on the radio and television," Walsh said.

He said the region needs to take a long-term view, thinking about the next 100 years on the Mississippi River.

But Buan said changing water levels and flows are already impacting people who use the river, from commercial shipping to recreation.

"Recreation areas are being impacted significantly," Buan said. "Before the precipitation regime change and flow regime change, these areas would typically close with the annual spring flood. But recently, they’ve been having to close them two to three times a year and then that requires reopening them, cleaning and all of the things associated with that, which results in lower revenues, higher costs and less public access."

He said barge traffic on the Mississippi has also been affected by changes on the river, but more research is needed to understand how it's impacting state and local economies.