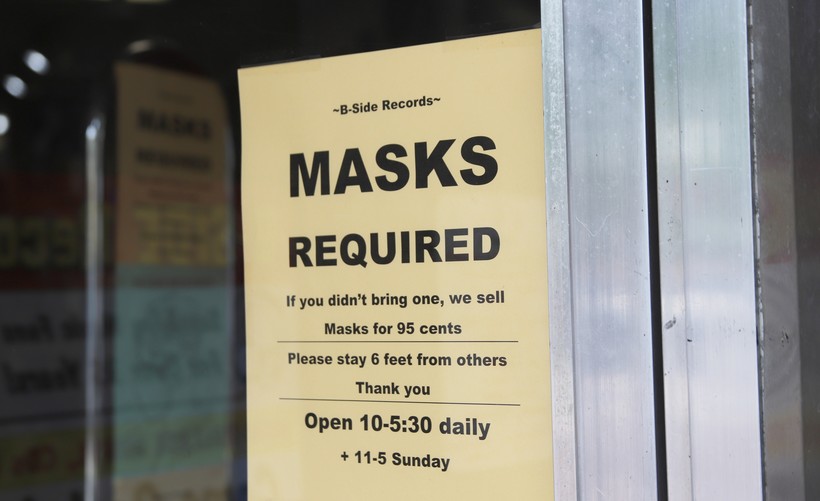 A sign on the door of B-Side Records in downtown Madison explains the store's mandatory mask policy. Steven Potter/WPR

New reports of COVID-19 cases are holding steady at near-record high levels in Wisconsin, based on the latest data published by the state Department of Health Services.

DHS reported 2,504 new cases of the virus Friday, bringing the average for the past seven days to 1,936 daily cases, the second-highest that average has ever been. Friday marks the first time since Sept. 11 that the seven-day-average hasn't risen to a new record high.

Friday's daily count of cases is the second-highest the state has seen yet, second only to Sept. 18, when DHS reported 2,533 cases.

The latest figures bring the overall total of positive cases in Wisconsin to 110,828, according to DHS. A total of 1,274 people in Wisconsin have died from COVID-19, with nine new deaths reported Friday.

According to DHS, 16.6 percent of all test results reported Friday were positive for COVID-19, bringing the overall percentage of positive tests over the past seven days to 16.5 percent. The previous seven-day period's test-positive rate was 15.3 percent.

Wisconsin's daily testing capacity — based on the availability of test supplies and adequate staffing — has grown from 120 available lab tests in early March to 38,959 as of Friday. The number of actual people with test results reported Friday was 15,079.

COVID-19 hospitalizations are also at a record high in the state, with the Wisconsin Hospital Association showing 528 hospitalized patients in Wisconsin as of Thursday.