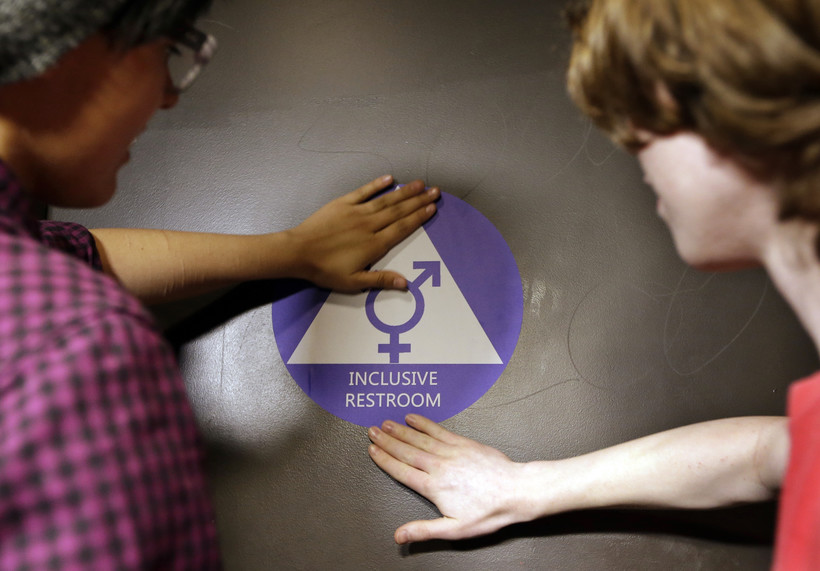 Students place a new sticker on the door at the ceremonial opening of a gender neutral bathroom at Nathan Hale high school Tuesday, May 17, 2016, in Seattle.

Officials Say Effect On School Policies Will Be Minimal
By Laurel White
Share:

On Wednesday, the Trump administration rescinded guidance issued by the Obama administration in May that directed schools to allow students to use the restroom that conforms with their gender identity, not their biological sex.

Those guidelines have not been in place since August 2016, due to a federal court's order.

Brian Juchems, senior director of education and policy at GSAFE, a transgender advocacy group, said Thursday that nearly 200 school districts in Wisconsin currently have policies that allow students to use the restroom corresponding with their gender identity. Those policies cover more than 50 percent of students in the state, he said.

Juchems said he doesn’t believe the Trump administration’s action will change that.

"As a state, we’ve already gone too far forward to start backing away from that," he said. "The school districts that have these protections, the sky hasn’t fallen. I think they’re going to continue to support students."

The Menasha School District, located in the Fox Cities region, has had a transgender bathroom use policy for about two years, said district superintendent Chris VanderHeyden.

VanderHeyden said the Trump administration action will not change the policy at any of his district’s schools.

"We really don’t have any intention of changing that policy at this time," VanderHeyden said. "We feel strongly that one of our goals is to create a positive and supportive environment that appropriately provides for the education, safety and welfare of all of our students."

Paru Shah, a school board member for the Shorewood School District, located in the northern suburbs of Milwaukee, echoed those sentiments.

"I think we’ll be able to maintain what we’ve already created," Shah said. "Our goal is, despite what's coming from the Trump administration, to find ways to continue to protect our students and make school is safe for everyone."

The Shorewood School District has had a transgender bathroom policy in place for three years, Shah said.

Shah said administrators plan to distribute information to parents and students about the district's continued support for transgender students.

"We’re going to be telling them nothing is going to change," she said.

Though the Trump administration action may not erase existing policies in Wisconsin, VanderHeyden said the administration’s statements may have a negative effect on some students anyway.

"I’m certain it will make some of our students and families uncomfortable," VanderHeyden said. "I think the message for everybody is we’re concerned about what’s changing, but we need to be patient and let some of this run its course."

"I think the discourse out there about how you’re not protected could have a really negative effect on their ability to do well in school and feel safe in school," Shah said.

Juchems of GSAFE said his organization has noted a rise in suicide and crisis hotline phone calls since President Donald Trump was elected in November, and the action on restroom use confirms some fears that have been simmering in the community since then.

"The first attack from the Trump administration on the LGBT community was on transgender kids," Juchems said of the administration action. "I think what’s particularly disappointing is that they’ve targeted some of our youngest and most vulnerable students."

The Wisconsin Department of Justice was one of several state departments that joined a federal lawsuit challenging the Obama administration’s guidance last year. With the latest action from the Trump administration, that lawsuit is "essentially moot," a state DOJ spokesman said.