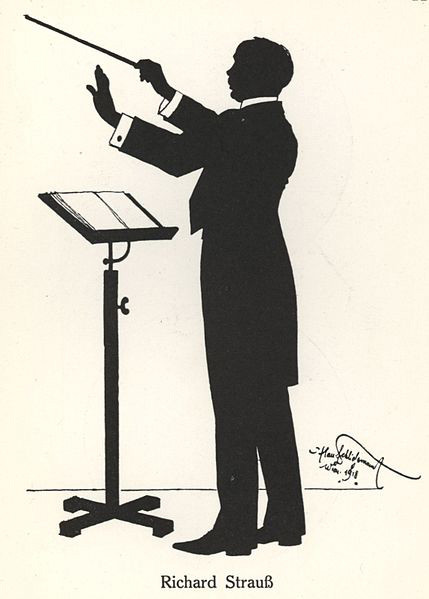 Richard Strauss silhouette created by Hans Schliessmann in Vienna in 1918

Richard Strauss' notorious opera Salome tells the lurid story of King Herod's stepdaughter and her lust for John the Baptist.  In its early days the opera itself was almost as sensational.

On January 23rd, 1907, the day after Salome was introduced at New York's Metropolitan Opera House, the press attacked it as "diseased in mind and morals."  But before the curtains had parted, Strauss' opera was already linked to a scandal because Oscar Wilde, the author of the play on which it was based, had spent two years in prison for homosexual practices.  [Wilde had been unable to publish Salome in England--or in English--so he had written it in French and had it published on the Continent.] The opera left little to the imagination.  Piling scandal on top of scandal, it exposed its Victorian audiences to Salome's sensuous "Dance of the Seven Veils" and featured the brandished head of John the Baptist.

Four days after the New York premiere the Directors of the Metropolitan Opera denounced the opera and barred a repeat performance.  Two days later the New England Watch and Ward Society took steps to prevent its being staged in Boston.  In March the Congregational ministers of Boston labeled the opera as "debauching and brutalizing."  Somehow a Boston performance was scheduled anyway until

the Governor and Bishop Lawrence issued a protest, leading the mayor of Boston to ban it entirely.

The Baptists and Methodists of Philadelphia chimed in with their own prohibitions.  And on it went for several years in several countries.  The censors canceled the Vienna premiere.  In Berlin the Kaiser tried to prevent its performance and in London in 1910 the Lord Chamberlain asked that certain lines be deleted.

But it may've been the opera's success that caused Richard Strauss his greatest discomfort.  When Salome was presented in Dresden in 1905 a ballerina performed the Dance of the Seven Veils. Much to Strauss' distress, once the opera caught on, the hefty soprano who sang Salome's part insisted on doing the dance herself.