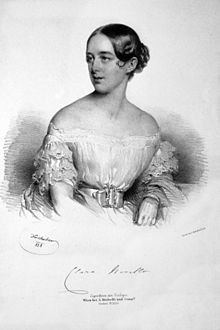 English soprano Clara Novello’s prime reason for her 1839 visit to Russia was to gain the favor of the Czarina, who could prove a powerful patron, but when she arrived in St. Petersburg, the Czarina was ill.  In western Europe Novello could count on great composers--Rossini, Mendelssohn, and Schumann–to promote her concerts. In Russia, without the help of the Czarina, she was on her own.

Those Russians who did befriend Novello left something to be desired. Behind the formal façades of their mansions she found foul-smelling air, and unwashed squalor. “I learned,” she wrote, “to know by the evil smells when rooms were bedrooms.” Social events consisted of endless card-playing and countless cups of tea in stuffy quarters. When Novello and her mother went for a walk to the Neva River, sleighs, fog, ice, and soldiers in uniform came across as a dull wash of cold gray landscape.

Novello’s attempts to get fresh air resulted in a sore throat that made it impossible for her to sing for weeks. She was planning to retreat to Germany when she finally received word that the Czarina would see her. The Czarina gave Novello a warm welcome, expressed regret at not being able to see her sooner, and vowed to make up for lost time, which she did by having Novello sing a favorite song over and over again.

The frazzled soprano informed the Czarina that her health required her to leave Russia at once, to which the Czarina replied, “Not when the Czarina wishes you to remain, mon enfant.”

All the more desperate and determined to go, Novello worked through the British Embassy to get permission to leave the country, but her retreat was as perilous and undignified as her sojourn had been. On an embankment near the Polish-German frontier the coach toppled, dumping Novello, her mother, and their baggage onto the icy ground.