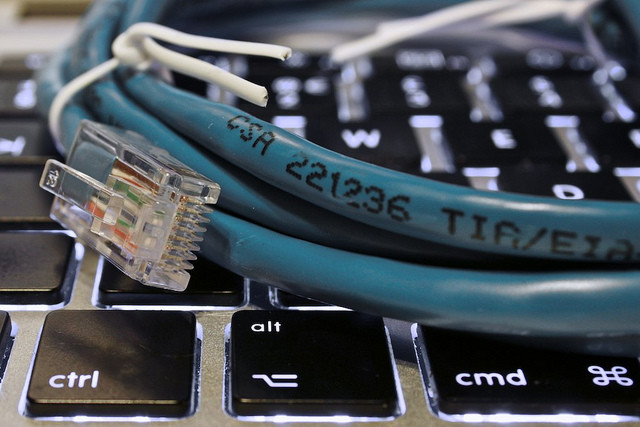 Karyn Schauf lives just outside of Barron, Wisconsin, on her family's nearly 1,000-acre farm, known as Indian Head Holsteins. Earlier this year, the Schauf’s retired from breeding dairy cows, but still grow corn and sell wood shavings. And the newest addition to their farm is high speed broadband, which has made their internet more dependable.

"It would frequently go down and the weather affected it greatly. If the leaves were blowing outside, then the wind blew the antenna. And we were always having to buy supplemental boxes to boost whatever, you know," Schauf said. "It was just such a headache. It really was."

Schauf’s son Zach and his wife wanted to move back to Barron from the Twin Cities, but with multiple businesses, he found the lack of reliable internet off-putting. "Probably our biggest hurdle in our decision to move back to Wisconsin was that where our family was, we didn’t have access to high speed internet," Zach Schauf said. "For our business, 99 percent of our communication is online."

Zach did move back to Barron and ran his businesses off of hotspots, which use cell phone towers to connect to the internet. He then started working with Mosaic Telecom, a small company that serves Barron, Dunn and Polk counties.

But Mosaic CEO Scott Behn said the cost of bringing a broadband connection to the farm was too high for the company and the Schauf’s to split.

"Our pricing to build out there was just too much for us to bear and even the thought of cost sharing with the two of us to make it a viable service for us with any type of payback was too much for them to also invest," Behn said.

Roughly 3 miles of trench had to be dug to get broadband to the Schauf’s farm, and the project cost more than $80,000.

"I’ve heard companies talk about the cost to install fiber anywhere from $20,000 to $30,000 on up depending on the type of barriers they may come across," she explained.

Progress came for the Schauf family and Mosaic Telecom when they received a matching grant from the state Public Service Commission in August 2016. The grant covered just under half the construction cost. Mosaic and the Schaufs each contributed $21,000.

The Broadband Expansion Grant Program, which made connecting the Shauf farm viable, was established in 2013 under Gov. Scott Walker. Walker’s current budget proposal adds $11 million for the grants over the next few years.

A new round of grant recipients was recently announced, and Dickinson, the state director, said the projects completed so far show the program is effective.

"Nearly $4 million has been awarded to 42 projects across the state. Those grants have impacted folks in 29 counties, providing improved broadband service and broadband options for over 20,000 households," Dickinson said. "Six-hundred businesses will have better access to e-commerce because of these broadband expansion grants."

Several grants have been awarded to small businesses or individuals who were so eager to receive broadband that they contributed some funds themselves: anywhere between $7,000 and $50,000.

Republican state Rep. Romaine Quinn, of Rice Lake, has worked with other legislators from rural areas to increase broadband funding. He says access to high speed internet is crucial to strengthening rural areas.

"It’s not just the monetary value. Broadband literally is a cornerstone, if not a centerpiece, of all the issues we’re having between population growth and decline, attraction, retention, workforce issues," Quinn said. "So it is sorely needed."

For farm owner Karyn Schauf, investing more than $20,000 was worth it.

"Oh yes, it was. It really was. And you know, not only that, it helps us to be a good neighbor because the fact that we did it allowed all our neighbors within a certain stretch here to also have the option to sign on and get this service now, too," Schauf said.

Those neighbors include 14 homes and three businesses.