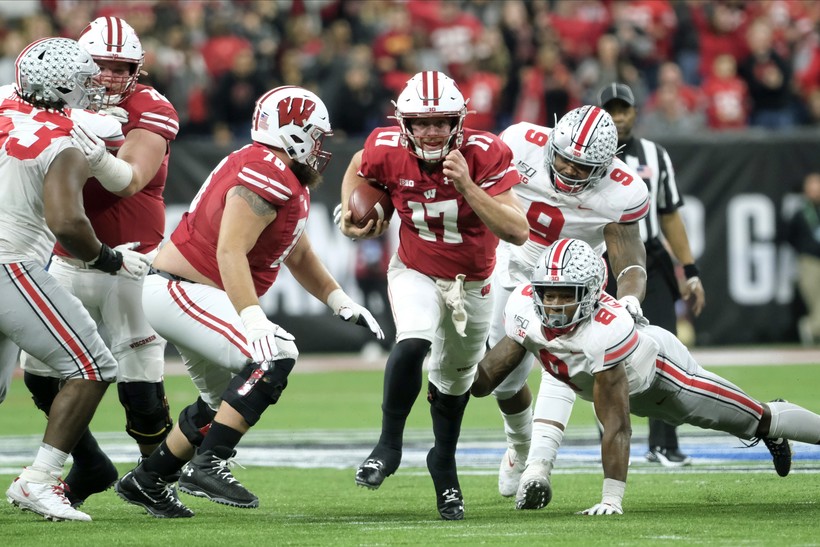 The Badgers Aim To Win First Rose Bowl Since 2000
By Megan Hart
Share:

The Wisconsin Badgers have won five consecutive bowl games, a Big Ten record. They’ll look to extend that streak Wednesday against the Oregon Ducks in the Rose Bowl.

Wisconsin is 3-2 all-time against Oregon. The Badgers are a considered a 3-point favorite going into Wednesday's game. It kicks off at 4 p.m. on ESPN.

Oregon is led by quarterback Justin Herbert, who’s likely to be an early pick in the 2020 NFL draft. The Ducks' offensive line was the difference maker when Oregon beat Utah in the Pac-12 Championship to earn its Rose Bowl berth. Wisconsin has a formidable defense with four shutouts this season, but it’s eighth-ranked rushing defense will have its hands full against Oregon running back C.J. Verdell, who’s averaging 6.6 yards per carry this season.

On the other side of the ball, the Badgers have arguably the best running back in the country in Jonathan Taylor. His 26 touchdowns this season lead all of college football. At Oregon media day, linebacker Troy Dye said it’s impossible to contain Taylor. Ducks defensive coordinator Andy Avalos said Taylor has a unique mix of speed and size.

"To go along with that, his vision is really, really good. And obviously within their offense they run multiple run schemes, whether it be zone schemes, gap schemes," he said. "And he does a really good job seeing and fitting all those things in, obviously working off the blockers."

Taylor, junior, is expected to enter the NFL draft next year, but not before leaving his mark on Wisconsin’s football program. Only Melvin Gordon has averaged more yards per carry for the Badgers than Taylor. Gordon now plays for the Los Angeles Rams.

Creating a balanced offensive attack will be a key for Wisconsin. Quarterback Jack Coan had a strong first half against Ohio State in the Big Ten Championship. His 70.1 percent completion rate leads the conference. He said he’s feeling good about Wednesday’s game.

"Obviously (Oregon has) an amazing defense. They’ve got a lot of great players all over the field so it’s going to be a tough game," he said.

The Badgers and the Ducks last met in the 2012 Rose Bowl. Oregon won the 45-38 nail biter, the highest scoring game in Rose Bowl history. That Wisconsin team featured Seattle Seahawks quarterback Russell Wilson and running back Montee Ball, who was a Heisman Trophy finalist.

Wednesday’s game marks the 10th Rose Bowl appearance for the Badgers and their fourth in the last 10 seasons. They haven’t won the game since their back-to-back titles in 1999 and 2000.

"We're really excited," Taylor said at the Wisconsin media day. "It's a lot of history with this game and this program, so we're looking forward to add to that."

The Badgers are led by head coach Paul Chryst, who’s in his fifth season. He and Alabama’s Nick Saban are the only Power Five coaches to lead their team to a bowl win in each of the last four seasons. Chryst said coaching in the Rose Bowl is special because of its tradition and how much it means to his players. He remembers watching it on television as a kid on New Year’s Day, he said.