Wisconsin has arrived at a turning point when it comes to how we pay for roads, and the debate comes at a time when road conditions in some parts of the state are deteriorating. Some of these challenges are out of the state's hand. Others are self-inflicted.

Wisconsin Public Radio presents this series on transportation funding that explores how we got here and what happens next. 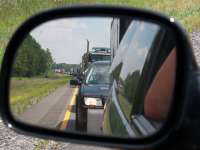 Transportation funding is gearing up to be one of the crucial issues in the current state budget cycle, but it's not new. Lawmakers and governors have ignored repeated warning signs and put off the toughest decisions on roads, a cycle that began at least a decade ago.

With state aid on the decline and tax rules keeping towns from raising more money locally, some municipal leaders are finding the only viable road maintenance option they have is turning pavement back into gravel.

Heavy trucks are a huge contributor to the wear and tear of Wisconsin's highways, but as the state grapples with how to pay for infrastructure maintenance, policymakers have welcomed trucks with open arms.

Elected officials often tout big-ticket highway projects as accomplishments, but a mixture of transportation funding woes and cost overruns have put them under more intense scrutiny in Wisconsin, with some officials arguing they aren't worth it.