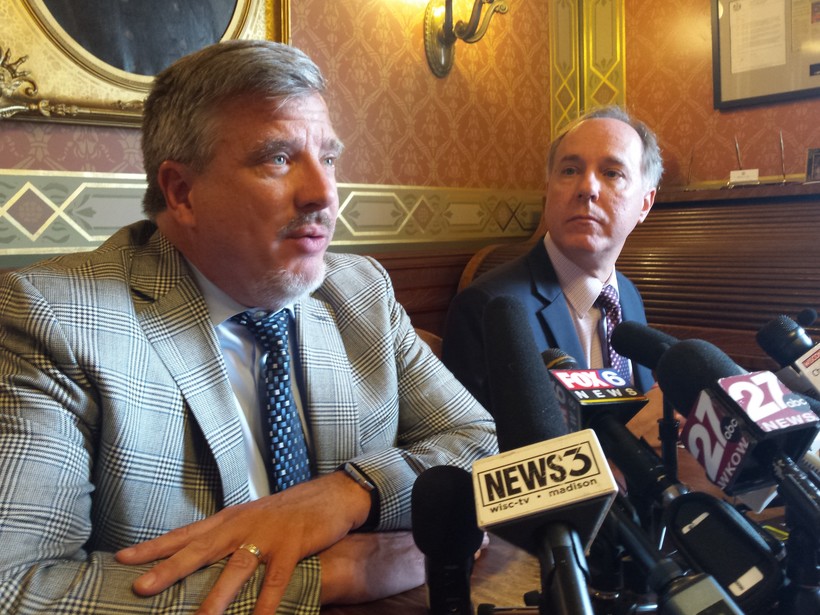 Republicans who run the state Legislature remain at odds over major pieces of Wisconsin's budget, with no end in sight to the dispute over how much the state should pay for roads.

A spokeswoman for Sen. Majority Leader Scott Fitzgerald announced Wednesday that Fitzgerald supports borrowing $850 million for roads in the next budget. That's $350 million more than Gov. Scott Walker proposed in the budget he unveiled earlier this year.

"I am very confident where our caucus is at, and they have said that we are not going to continue to borrow and spend without a long-term answer,'' Vos told reporters. "And that's why we are where we are."

Rep. John Nygren, R-Marinette, the co-chair of the Legislature's Joint Finance Committee, had previously hinted the panel could meet Thursday to take more votes on the budget. But by Wednesday afternoon, Nygren announced that meeting wouldn't happen.

In addition to transportation, Republicans are still negotiating the proposed budget for K-12 schools, which would affect how much the state cuts property taxes on the typical home in Wisconsin.

Nygren said Republicans were close to an agreement on school funding, but he said transportation remained a stumbling block in budget talks.

"We’ve had the same discussion multiple budgets in a row now," Nygren said. "I think our position is right now we’re going to stop having this reliance on borrowing."

The transportation budget lawmakers approved two years ago increased borrowing by $850 million, the same amount Fitzgerald, R-Juneau, is calling for this year.

Fitzgerald spokeswoman Myranda Tanck said $350 million of that borrowing would be supported by Wisconsin's general fund, which gets its revenue from income and sales taxes and pays for expenses like schools, prisons and health care for the poor, elderly and those with disabilities.

Most borrowing for roads is typically paid back by Wisconsin's dedicated transportation fund, which gets its revenue from gas taxes and vehicle registration fees.

Tanck said paying for the new borrowing Fitzgerald supports would cost the state's general fund a total of $8 million in the next budget.

"Talks with Assembly leadership and finance members over the past several days have been very productive and we look forward to continued discussions throughout the week," Tanck said.

It's not the first time Fitzgerald has floated borrowing more to break the budget impasse. He suggested the idea more than a month ago to a similar, chilly reception from Assembly Republicans.

Under the transportation budget Walker proposed, the state would spend 22 cents of every dollar paying off the interest on old debt.

Shifting new borrowing to Wisconsin's general fund would keep that number from growing, but Nygren has argued it would decrease the amount the state has available to spend on schools and other programs lawmakers support.

Given the pace of budget talks and the impasse over road funding, it would be difficult for lawmakers and the governor to have a new budget in place by the time the next fiscal year starts July 1.

Budget deadlines carry more consequences in other states, but in Wisconsin, when there's not a new budget in place, spending continues at the same level as the last budget.