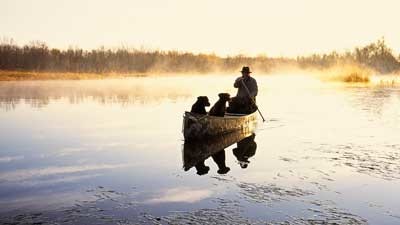 Kenny Salwey's dogs have been his companions for hunting, fishing, and just living his life. Photo courtesy of Kenny Salwey.

One of the wonderful things about living in Wisconsin is that there are so many wonderful natural areas to enjoy and four real seasons to do it in. For many, it’s a weekend activity, or if we're lucky, we get out in nature for a week at a time for vacation.

But Kenny Salwey has spent his life immersed in the rhythms of the seasons, the animals and nature itself. And he’ll tell people that it’s a better life if they have a dog at your side.

Salwey is one of the last of a breed of outdoorsmen, the so-called "River Rats." These days, he also spends time in classrooms around the state talking to children about respect for the environment and his adventures. He’s also the author of several books, for both young people and adults. His most recent is “The Dogs and I: True Tails from the Mississippi.”

In “The Dogs and I,” Salwey shares stories of the dogs who were his earliest companions in childhood, when Kenny said he was just “knee high to a grasshopper.” He relates the adventures that he had with his dogs as a teenager, and when he came back from serving in the U.S. Army. They were all different, and all special companions for him.

“Dogs have always been my best friends," he said. "All the years, the 28 years, that I spent in the place called the Whitman Swamp, a 6,000-acre seasonally flooded, hardwood, Mississippi backwater swamp, a little south of Buffalo City, Wis., my dogs definitely were my best friends. “

But if there is one dog that seems to have a special place in his heart, it was Joey Girl. This small, black Labrador retriever came to Salwey and left a lifelong impression. Thanks to Joey Girl, Salwey and his wife had their only experiences with raising litters of puppies.

Many might think a River Rat who lived off the land would be a tough guy, but not when it came to saying goodbye to that first litter of pups. Salwey related that “I made the mistake of naming them all. And about 4 more weeks went by, and Armand came to pick up his pups. … As he put each one in the truck, it got a little bit harder, and somehow the wind felt harsh, and it actually made my eyes water.”

When asked if there was one thing he would change about his life, Salwey said that his response is always, “I’d like to be more like a dog.” Why?

“A dog is always glad to see you. It can be a miserable day, but you come home, your dog wags her tail, jumps up and down, they lick your hand, they love you. They don’t care what station in life you hold, they don’t care what size your bank account is, or whether you don’t have a nickel. They don’t care how you smell, they don’t care how you’re dressed, they’re just happy to see you. They ask very little in return. All they want is a pat on the head, a hug, something to eat, a dry place to sleep. They give you everything. They give you something called unconditional love. And that’s sometimes hard to find among humans," he said.

The BBC made a documentary about Salwey called “Natural World - Mississippi, Tales of the Last River Rat.” It is available on YouTube in several segments.