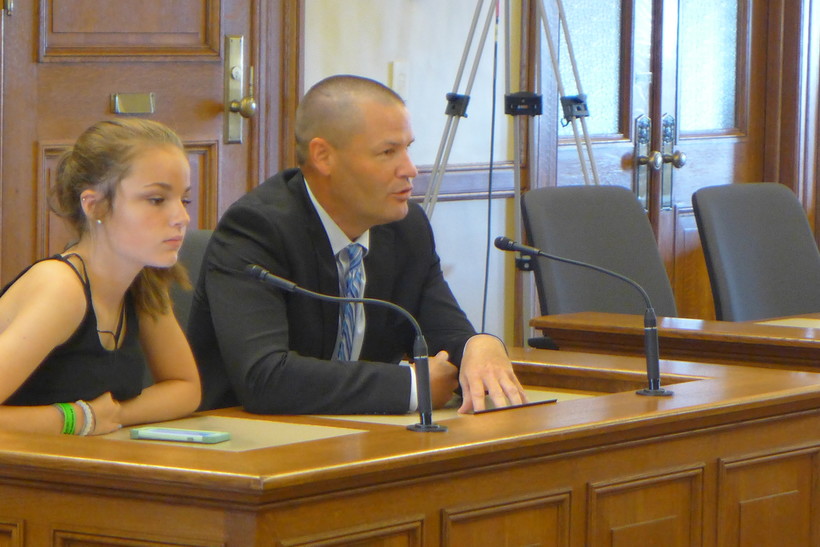 Tim Wendler and his daughter Tealyn, 14, of Waukesha, urged Wisconsin lawmakers to pass a right to try bill at a public hearing Wednesday at the state capitol. Tim's spouse and Tealyn's mother, Trickett, died of ALS.

Proposals allowing those with life-threatening illnesses to get unapproved, experimental drugs are making headway at the federal and state levels.

Wisconsin U.S. Sen. Ron Johnson’s  so-called "right to try" bill recently passed the U.S. Senate. A similar bill passed the Wisconsin Assembly in March and is now being considered by the state Senate. At a Senate committee hearing Wednesday, Tim Wendler urged lawmakers to support the proposal. His wife Trickett died of ALS two years ago.

"It would have given us hope and we didn’t have any," Wendler said.

Some are concerned such bills give patients false hope because manufacturers are not required to supply experimental drugs.

"The manufacturing aspect of this, it’s kind of the elephant in the room. It’s interesting it doesn’t get talked about as much," said Mark Grapentine with the Wisconsin Medical Society, which opposes the bills.

The Assembly bill passed by a margin of 85 to 13 this spring. Like the state Senate bill, it requires a doctor’s approval for experimental drugs that have passed a Phase l clinical trial, the initial Food and Drug Administration approval process which shows a drug isn’t toxic, but doesn’t determine if it works.

"When you are taking an experimental drug that has only overcome the bar of not killing you, what happens in a situation that if you take a drug and you end up having unbelievably adverse, awful reactions to it? Whether you’re going to live three or six months after that, you’ve been put in a worse situation," Grapentine said.

The author of the Assembly bill, Patrick Snyder, R-Schofield, said that should be up to the patient and their doctor, not the FDA.

"The one thing we’re not doing is giving them false hope. The main thing is to be totally honest and say, 'Listen, we’ve exhausted everything we have traditionally. This possibly could work. Do you want to do it?'" Snyder said.

Supporters say it would provide an option to those who have exhausted other means of treatment, like clinical trials which choose which patients participate and which get a drug versus a placebo.

"We participated in a couple (clinical trials) and got denied for a couple of others," Wendler told lawmakers Wednesday on the Senate Committee on Health and Human Services. "Every time we went into these conversations with the doctors or scientists a little more hope would erode."

Patients with life-threatening illness can currently get unapproved drugs through the FDA’s Expanded Access Program. But lawmakers say the process is complicated and takes a long time. A recent report by the Government Accountability Office indicated the program reviews all cases within 30 days and approved 99 percent of requests.

"We think there are better methods that are in existence right now that actually offer a quicker timeline and a better potential for success," Grapentine said.