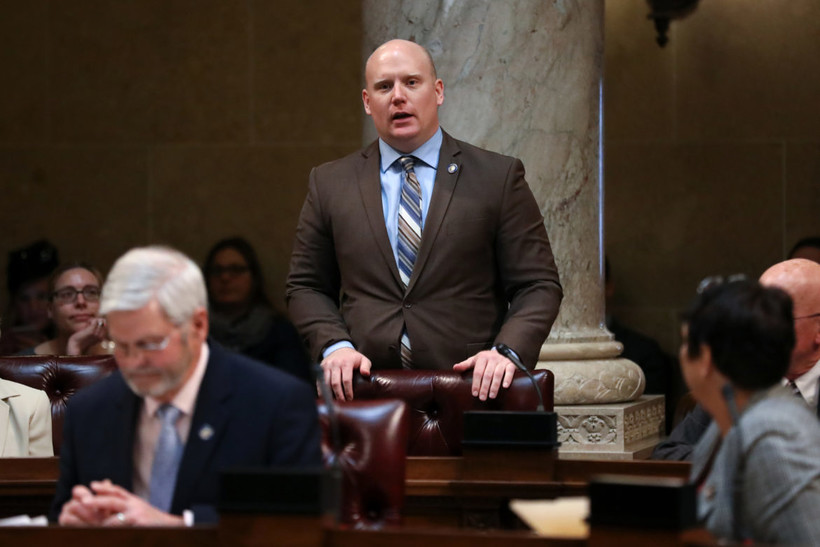 State Department Of Workforce Development Hasn't Heard Response Yet From US Department Of Labor
By Bram Sable-Smith | Wisconsin Watch
Share:

After issuing a slew of denials, state regulators are now pushing to give federal pandemic aid to laid-off Wisconsinites with disabilities.

The Wisconsin Department of Workforce Development (DWD) is asking the U.S. Department of Labor to allow it to issue Pandemic Unemployment Assistance — a program under Congress’ disaster stimulus bill — to unemployed workers who also receive federal disability benefits. DWD spokesman Ben Jedd on Tuesday said the agency had yet to hear the labor department’s response.

The request signals a possible about-face in practice, and it follows a WPR/Wisconsin Watch report about the DWD’s denials of aid under the program to such part-time workers. 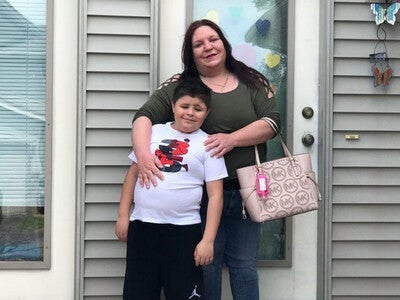 Jessica Barrera, who receives Social Security Disability Insurance (SSDI), lost her part-time job at Groome Transportation in Eau Claire, Wis., due to the pandemic. She filed multiple unemployment claims with the Wisconsin Department of Workforce Development, but was denied due to a state law barring the concurrent collection of federal SSDI and state unemployment insurance benefits. DWD’s sudden push to reverse its practice gives her hope as she seeks to pay down debt accrued during the pandemic. She is seen here with her son Niko. Courtesy of Jessica Barrera

The report profiled Jessica Barrera, a single mother in Eau Claire with a rare blood disorder and depression and anxiety. Her $1,000 to $1,200 monthly Social Security Disability Insurance (SSDI) checks cover little more than rent for herself and her son, meaning she must also work part time. After COVID-19 hit, she was laid off from her job and denied additional pandemic unemployment payments.

About 175,000 working-age Wisconsinites rely on SSDI to supplement their income, a vast majority of whom work. SSDI guidelines allow — and even encourage — part-time work so long as an employee does not earn more than $1,260 per month. The federal program serves people who have worked and paid Social Security taxes but can no longer perform "substantially gainful activity."

But Wisconsin’s Republican-controlled Legislature in 2013 passed a law barring that group from simultaneously receiving state unemployment insurance after losing work.

DWD staff has cited that law in blocking Barrera and other SSDI recipients from receiving benefits under PUA — separate funds Congress earmarked for people who lost their jobs because of the pandemic but "would not qualify for regular unemployment compensation."

"If Wisconsin SSDI recipients otherwise meet COVID-related eligibility, they should not be disqualified from PUA benefits," Frostman wrote in a June 9 letter to U.S. Labor Secretary Eugene Scalia.

The letter came two weeks after Amy Banicki, DWD unemployment insurance deputy administrator, sought federal guidance on the issue, noting the DWD staff believed SSDI recipients were ineligible for pandemic aid, while Frostman thought they might be eligible. DWD staff said the 2013 law, coupled with Congress' lack of specificity on how to handle SSDI claims, left the agency with no choice but to deny such claims.

Writing to Scalia, Frostman called the interpretation flawed and possibly discriminatory against people with disabilities.

"I am concerned that the interpretation could be viewed as denying benefits based on disability using SSDI as a proxy or as having a disparate impact on individuals with disabilities because all SSDI recipients — by definition — have disabilities," Frostman wrote.

He added: "The Department ardently protects against discrimination and such an interpretation would run counter to that policy."

Frostman’s letter came after WPR and Wisconsin Watch reported that DWD had denied regular unemployment insurance to 138 SSDI recipients between March 16 and May 29.

Jedd said DWD lacked data on how many SSDI recipients applied for PUA. The issue could potentially affect thousands of workers as the economy struggles to rebound during the pandemic, considering that more than 158,000 SSDI recipients in Wisconsin also worked as of 2018, according to federal statistics. 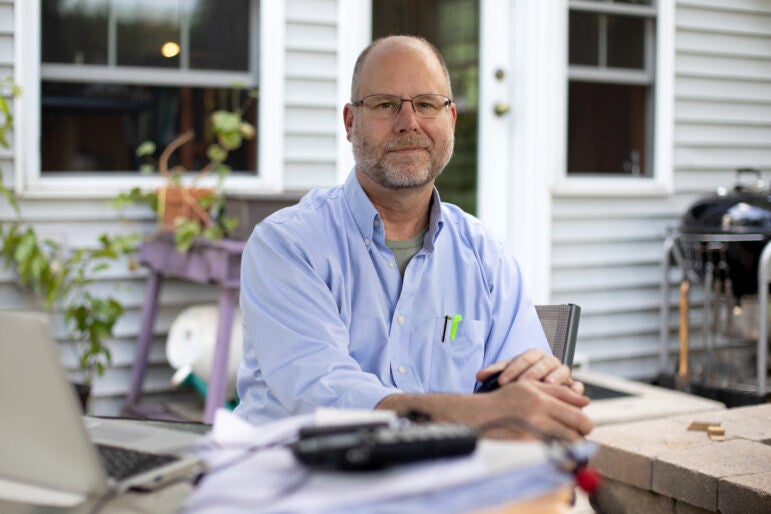 Victor Forberger, supervising attorney for the University of Wisconsin’s Unemployment Compensation Appeals Clinic, accuses Wisconsin of discriminating against people with disabilities, saying its denial of claims for federal dollars runs counter to Congress’ aim of helping people after losing their jobs due to the pandemic. He is encouraged by the Department of Workforce Development’s sudden push to reverse its policy. Forberger is seen working from his home in Madison, Wis., on May 26, 2020. Coburn Dukehart / Wisconsin Watch

Victor Forberger, supervising attorney for the University of Wisconsin’s Unemployment Compensation Appeals Clinic, represents about 20 SSDI recipients in appeals of their denied claims. He cheered the possible change.

"Given the numbers of people affected by this policy it’s just phenomenal," he said.

"I’m hoping that something can be done here, and that they follow through on this."

Barrera is among those who could benefit from the shift, along with her 10-year-old son Niko. DWD denied her claims for regular unemployment insurance and pandemic aid after an airport shuttle service laid her off in March.

Spurred by the news report, a reader offered to pay the car insurance bill Barrera had let lapse after she lost income.

"It was a retired couple. They had taken their stimulus money and put it aside, and they were giving portions of it to different people that they thought it would help," Barrera said.

But Barrera said she accumulated nearly $4,000 in debt since March — paying for rent, internet, utilities and clothes for fast-growing Niko, among other expenses. She appealed her PUA denial but has yet to receive a hearing date.

Unable to wait any longer, she found a new job working weekends at Menards beginning this month. The prospect of retroactively receiving federal aid — if the state reverses its policy and its overwhelmed unemployment insurance system resolves her appeal — offered additional hope.

"I’m at a loss for words," she said of Frostman’s letter. "I prayed so hard ... Today, out of all the days, I was thinking, 'What am I gonna do? There are three months of income gone, how do I recover this money?'"

Forberger said he was surprised to see Frostman’s letter, given that just last week, an unemployment judge denied the appeal from one of his SSDI clients based on the 2013 state law. On June 9 — the date of Frostman’s letter — a DWD attorney pushed Forberger to drop that appeal.

The client "is ineligible for each week of each month that she receives SSDI — this is well-settled. It is questionable to me what purpose her appeal serves," Andy Rubsam, the DWD attorney, wrote to Forberger in an email. "Please let me know whether she intends to withdraw (or please contact the hearing office to withdraw the appeal)."

The mixed messages coming from the agency “indicate there may be some obstacles down the road” for SSDI recipients seeking unemployment benefits, Forberger said. He calls the 2013 law discriminatory.

"It’s pretty obvious to anyone who does employment discrimination law — that if you had a private employer taking these actions, they would be in serious trouble," Forberger said.

Jedd said DWD hopes a formal Department of Labor opinion will give Wisconsin wiggle room to issue pandemic benefits to SSDI recipients, despite the 2013 state law. But DWD will not update its approach until that guidance arrives, he said.

This story comes from a partnership of Wisconsin Watch and WPR. Bram Sable-Smith is WPR’s Mike Simonson Memorial Investigative Fellow embedded in the newsroom of Wisconsin Watch (wisconsinwatch.org), which collaborates with WPR, PBS Wisconsin, other news media and the University of Wisconsin-Madison School of Journalism and Mass Communication. All works created, published, posted or disseminated by Wisconsin Watch do not necessarily reflect the views or opinions of UW-Madison or any of its affiliates.