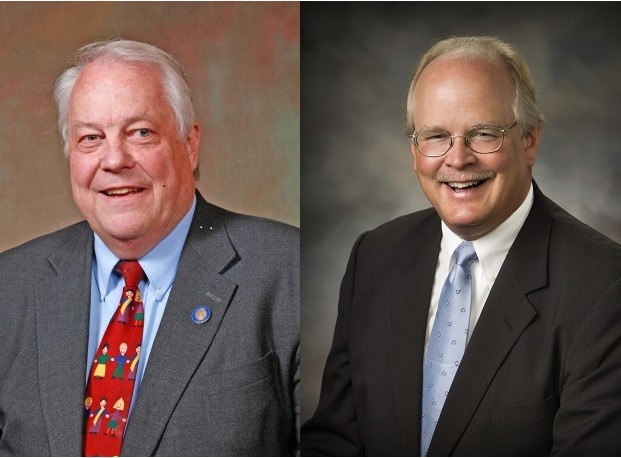 Jauch, Schultz Take Pride In Their Spirit Of Compromise
By Cynthia Schuster
Share:

But for both of them, there’s still a lot of work left to do.

“I’m going to spend a lot of time on citizenship and civic education,” Jauch said. “I think one of the real weaknesses is that we have people who are too enraged and not engaged and … more inflamed and not informed. We need to get people to understand that democracy isn’t just voting. It’s about staying involved, informed and really holding our officials accountable so they make decisions.”

For Jauch, civic engagement is a two-way street. While he hopes citizens will stay informed about the issues standing before them, he also expects elected officials to be responsive to the needs of their constituents in the future.

“We learn so much from the people who we represent -- who we serve -- and the way they live their lives and they’re committed to community. They believe that you need to solve problems, they work together, they believe in partnerships, not partisanship,” Jauch said.

For Schultz, listening to his constituents was a crucial part of his decision-making, especially during the fight to pass Act 10 a couple of years ago. When he voted against the bill, it ultimately inspired a recall effort against him.

“That’s, in the end, what I did was listen to my constituents around south-central and southwestern Wisconsin,” Schultz said. “Five hundred to 600 people would show up a night. I would have to stand up in a very lonely way in front of them, tell them that I was there to listen to them … and what people told me is that they thought that the bill was too extreme.”

Schultz steps down from his 22-year career in the state Senate after years of stark partisanship in the Legislature. While he’s been criticized for defecting from the party line, he said the criticism saddens him but ultimately doesn’t affect him.

“I think we’re going through a period of time when partisanship on both sides of the aisle is getting more extreme,” Schultz said. “A lot of people have suggested I’ve moved to the left, but you know, I’m probably the only guy who moved to the left by standing still. I just sort of feel like the Republican Party has moved way to the right.”

For both Schultz and Jauch, the crowning achievements of their career come down to one thing: Compromise.

“Our greatest accomplishments in Wisconsin have always been those times in which we worked together, in which we solved the problems that are sustained over time,” Jauch said. “People do love living in Wisconsin for its good quality schools and for the traditions that are so important. Let’s just hope that we can get back to the Legislature representing those views as well.”