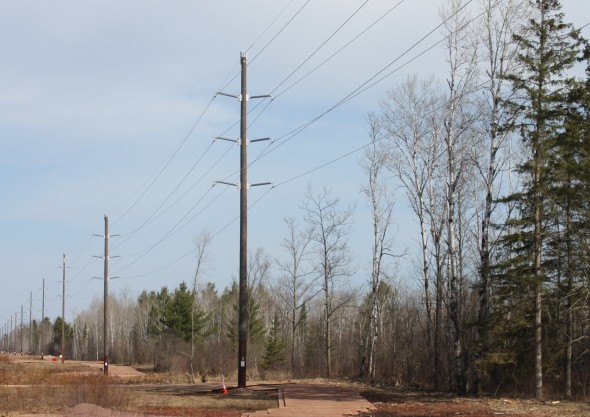 Two routes are proposed for a new transmission line on the Bayfield Peninsula. Photo courtesy of Xcel Energy

Residents Weigh In On Proposed Transmission Line In Northern Wisconsin

Community members on the Bayfield Peninsula in northern Wisconsin are urging the state Public Service Commission to approve a proposed transmission line that follows the existing utility corridor. The remarks were part of a public hearing in Washburn on Tuesday evening over plans for a 34.5 kilovolt transmission line.

Northern State Power Co., a subsidiary of Xcel Energy, submitted an application earlier this year to build the transmission line and two new substations. Utility company officials said the project is needed to strengthen power and reliability of service to communities in the area.

Xcel operates one transmission line that provides power to the Bayfield Peninsula, and it's proposing a second circuit, or source of power, to serve the east side of the peninsula, citing the line's age and increasing loads since it was originally built.

The commission is considering two possible routes that include an east route, which would follow the existing roughly 19-mile transmission line and utilize a double-circuit line. A west route would cross around 26 miles through county forest land along existing roads and mostly use a single-circuit line. Both would require temporary bypass lines to maintain power during construction.

The west route would require more new right of way from landowners with around 60 to 70 homes within 300 feet of the proposed routes or near bypass lines. Construction of a new line along the existing route would result in the clearing of fewer acres of forested wetland and be more shielded from view than a new transmission route.

Residents who spoke at Tuesday's meeting cited the potential economic impacts of a new route.

"Forestry is a very important economic driver in Bayfield County," said Jeff Silbert, Bayfield County board member. "We have revenues of $3 million to $5 million a year for the last eight years. We don’t want to lose acreage if we don’t have to."

Residents also fear the aesthetic impact a new route would have on the region’s tourism industry. Jack Beagan, chair of the Town of Bayfield Planning Commission, said clearing trees and erecting a transmission line on Star Route, a primary tourist road for the town, would be inconsistent with the rural character of the area.

"Tourists are fickle and they may choose to perhaps spend their money elsewhere, and we do not want that to happen to our local businesses," said Beagan.

The utility's application states the east route would cost around $35 million, which is about $7 million more than the proposed west route. However, some residents argued the cost estimates don't add up.

"The eastern route line is decades old and will need to be replaced and when replacing the existing line and adding a new line is considered it seems likely that the eastern would be a lower expense then was indicated," said Ken Bro, chair of the Washburn Town Plan Commission.

Others raised potential fire hazards with a new a transmission line through forested areas of the county. Those who spoke also argued the east route would have fewer environmental impacts.

The west route could potentially impact more waters designated as special natural resource interest areas by the state, as well as threatened bird and plant species. State officials said such impacts could be minimized or avoided on both routes.

Ellen Heine, siting and permitting agent for Xcel Energy, said the utility provider is open to building either option.

"They both have pros and cons and we’ve definitely gone back to the drawing board based on public feedback to come up with a way to do the east route," she said.

The commission conducted an environmental assessment of the impacted area, and staff have made a preliminary determination that no environmental impact statement is needed because the project poses no significant impacts to the public and environment.

Environmental group Clean Wisconsin has objected to the commission's findings, arguing the review is incomplete and does not comply with requirements. They cite failure to mention local policies favoring the east route and which path would be consistent with state law prioritizing lines in existing utility corridors.

The utility must obtain federal, state and local permits for the project, which is expected to occur in the next year. Xcel is proposing to begin construction in 2020.