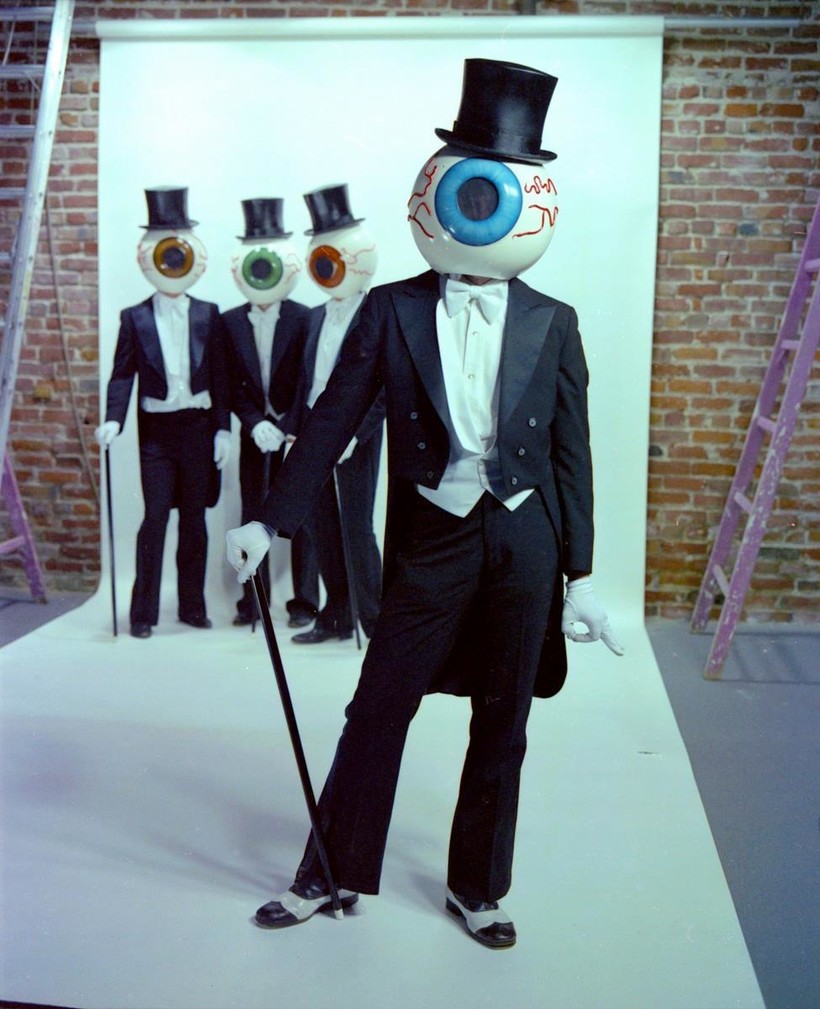 The Residents' 'Theory Of Obscurity' Allows Them To Pursue Pure Art

The Residents are an art collective known in some circles for their avant-garde music and multimedia work. You may have seen photos of them wearing their trademark tuxedos and eyeball-head masks with top hats (like in the above photo). Their fans include magician/comedian Penn Jillette and "The Simpsons" creator Matt Groening.

But who exactly are the people underneath those giant eyeball heads? One of them was Hardy Fox. He was the band's co-founder and chief composer. Fox died on Tuesday, Oct. 30, 2018 after battling brain cancer.

Don Hardy should be able to reveal the true identities of the other band members. He's the director of "Theory of Obscurity: A Film About The Residents."

So WPR’s 'BETA' asked Hardy – Who are The Residents?  "I’ll never tell," he replied.

Hardy has lived in the Bay Area for several years and says it really feels like home now. One of the things that he likes so much about living out there is that there are a lot of mysteries.

One night, while having drinks with a couple of friends, Josh Keppel and Bart Bishoff, the discussion turned to The Residents. It was a band that Hardy didn't know much about.

"Josh had known them a little bit," Hardy said. "He’d helped shoot a concert DVD for them and Bart had been a lifelong fan. And just hearing how they talked about the band, it just seemed very interesting and very much about the Bay Area as a whole, especially the arts scene back in that early 70s time period. So it just seemed like a very interesting subject to try to tell a story about a band where you can’t interview the band."

Hardy said that even though he didn't know that much about the band, he was intrigued enough by the group's philosophy.

"I really appreciate what The Residents stand for, which is this idea of creating art without celebrity. And that’s so rare in our world today and it’s something that is a core belief that they have is that the work should stand for itself. And you should do what you really want to do, what drives you, and not necessarily what the fans want," Hardy said.

Since The Residents have managed to remain anonymous since they started in 1974, it seems that one of the biggest challenges that Hardy faced in making the film was how to make an authoritative documentary about an anonymous group. Was that something he thought a lot about before filming began?

"Probably I didn’t think about it enough or I wouldn’t have gone down that road," Hardy said. "It had to do with their 40th anniversary. That really drove the idea for making the film that hey, they’re going out to do this 40th-anniversary tour. And it’s the first time in their long history that they’ve really been in a reflective place where they’re talking about all of the different ups and downs of their career so it was a perfect time to try to document them."

Hardy's documentary includes a clip from Les Claypool of the rock band Primus in which he offers a very unique description of The Residents' music: "It’s like a fungus. It just kind of takes over and then you kind of get used to the fungus. And then you learn to appreciate the fungus. So The Residents was a big part of my musical fungus."

Does Hardy agree with Claypool's description?

"Yeah, it’s very fungal. That’s a good way to put it. But I think to look at The Residents as a whole, it isn’t just about the music. It’s about the art that goes along with it and you don’t have to like it all. In fact, I don’t think anybody could sit here and say — Oh, maybe there’s a couple of superfans — they would say they’ve loved everything they’ve ever done. But it is very varied," he said. "There are some earlier albums, like I would say 'Fingerprince' and 'Duck Stab,' you know, maybe those are two of the more accessible ones. And then there’s an album like 'Eskimo' that’s very tough."

In the early days of MTV, The Residents enjoyed a lot of music video airplay.

"When MTV first started, they had very little content to actually put on there so The Residents became one of the bands in high rotation, which is so bizarre knowing how MTV changed over the decades," Hardy said. "So they had this clip laying around for a song called ‘Hello Skinny’ that is very strange. It’s a clip directed by Graeme Whifler, who was an early collaborator with The Residents. And it stars just one strange figure and follows his travels through a night in, I guess, San Francisco. And ultimately they use a lot of still photos in there and do some movement on the still photos. But it’s a very creepy clip."

Hardy says it was The Residents' renegade attitude to go wherever their imaginations would take them that really inspired his documentary.

"I find music docs as a whole to be very boring. What interested me the most about The Residents is that they just played by their own rules. And you could go anywhere with it. The best compliment I received since the film has been out is from a 12-year-old girl that got dragged to see it by her father who had collaborated on an art project with The Residents 20 years ago. And she came up to me after the screening and said, ‘I thought The Residents were just some dumb thing my Dad was into but now after watching this, it makes me want to go out and make art.’ So if more people can take that away from it, that you don’t have to necessarily like them but like what they stand for. They didn’t contemplate the ‘what ifs?’ of could they be successful musicians? In fact, they didn’t even know how to play their instruments. But it made the create something else."