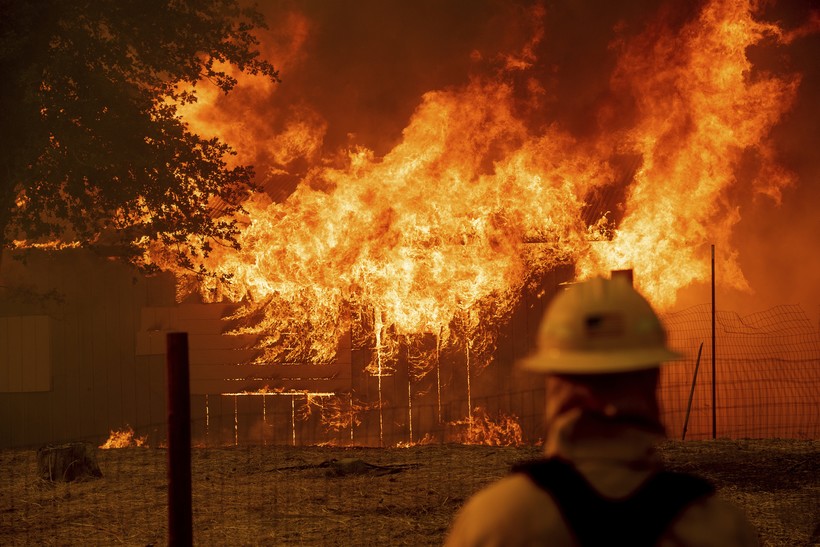 Residents, Communities Have To Learn To Live With Fire, Former Forestry Adviser Says

Wildfires are currently tearing across the western part of the country. Sixteen active wildfires in California have led to the death of at least eight people. And millions of dollars have been spent in fire suppression efforts. But one former forestry adviser said the impacts of these fires, and the cost, can be subdued with some targeted action.

Cassandra Moseley, director of the Institute for a Sustainable Environment at the University of Oregon, said thinning brush and building structures that can withstand fire are some of the ways to combat relentless wildfires that are becoming more prevalent and lasting longer.

"The fire community talks a lot about how we need to learn to live with fire," said Moseley, who is the former chair of the U.S. Department of Agriculture Forestry Research Advisory Council, which advises the agriculture secretary on forestry research priorities. "It isn't going to go away, but communities and households can really have a different experience with fire when it does come if they're prepared."

The National Interagency Fire Center reports that 98 active large fires are burning 1.2 million acres across the western United States, Florida and Alaska. Since the start of this year, 4.6 million acres have burned. Wildfires can be caused by lightening, but up to 90 percent of wildfires in the U.S. are believed to be caused by humans who might leave a campfire burning or fail to fully put out a cigarette, according to the National Park Service.

Moseley said since the 1970s, the wildfire season has lengthened by 78 days.

"People are starting to talk about a wildfire year instead of wildfire season, and that's really changing not only what we see on TV, but how people experience it on the ground," she said.

Worsening the fires' spread on forested land in the past several years is dry air, high temperatures and dense housing that lends tinder to the mix, Moseley sad.

"In some places, these are suburbs or even urban areas where fire can come through," she said. "In those cases, really all you can do is get out of the way, get people and animals out of the way as fast as you can."

Some scientists have argued that human-caused climate change has contributed to the increase in forest fires by making conditions drier, which leads to more tinder that becomes fuel for fires. Warmer conditions can also lead to increases in lightening strikes, which can contribute to a greater risk for wildfires.

The way Americans managed forests in the 1900s also plays a role, Moseley said, noting that aggressive fire suppression in the 1900s rose from concern over a possible timber famine after extensive timber harvests in Wisconsin and Minnesota. Over time, that has allowed for small shrubs and trees to build up, adding more burning potential for fire when it does strike.

"The longer fire suppression goes on, it's harder and harder to fight fire," she said.

What is especially problematic for longer wildfire seasons is that federal resources grow sparser.

Moseley said the U.S. Forest Service, which manages fire in national forests and grasslands, has watched expenditures to fight fires skyrocket, from about 15 percent of it's budget to more than half. She expects that number will continue to grow.

There is hope that the forest service's budget will be aided by a provision in the 2018 Omnibus Spending Package signed into law earlier this year that changes the way wildfire suppression is funded. A contingency fund with up to $2 billion will help allay the need for borrowing from other funds to pay for bringing fires under control.

Previously, the department had to borrow from other programs if it ran out of money in its wildfire suppression budget to fight fires.

While fires will continue to burn, Moseley said everyone from residents to communities and public landowners can help slow the spread by working together to determine where thinning should take place and how communities are going to respond to potential wildfires.

"The key here is to do it strategically," she said. "There will never be enough money. If you do it around communities in the right landscapes and you really prioritize those strategic acres, that's where you're going to make a difference."