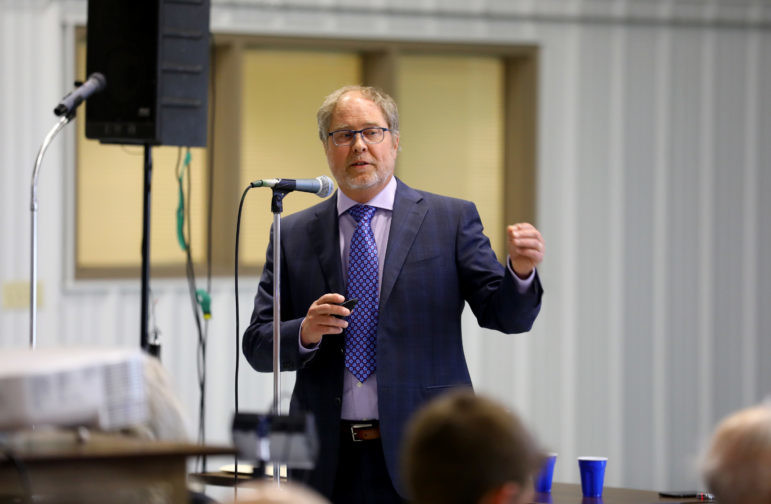 Mark Borchardt, a microbiologist with the U.S. Department of Agriculture's Agricultural Research Service, presented data on water contamination in Kewaunee County during a meeting at the Expo Hall at the Kewaunee County Fairgrounds, June 7, 2017.

People in Kewaunee County are getting sick by drinking water from private wells. That's a preliminary conclusion from the leader of a study on the region's groundwater.

A U.S. Department of Agriculture microbiologist presented preliminary findings of a two-year groundwater study on Wednesday night in Kewaunee County.

In Kewaunee County, 4,896 households depend on private wells.

Mark Borchardt, a microbiologist with the USDA, and a team from the University of Wisconsin-Oshkosh, randomly monitored 621 wells. They found about 380 county residents are at risk of contracting a stomach parasite every day.

About 200 people attended a meeting at the Expo Hall at the Kewaunee County Fairgrounds, June 7, 2017. Scientists found 60 percent of tested wells in Kewaunee County were contaminated by fecal microbes, contributed by both human and bovine. Coburn Dukehart/Wisconsin Center for Investigative Journalism

"We know in Kewaunee County there's two to nine cases of cryptosporidiosis per year that are lab confirmed," Borchardt said.

But Borchardt said the symptoms most often go unreported "with the dose that we calculated that's 10 infections per 10,000 people. That means in Kewaunee County we'd expect about 140 cryptosporidiosis cases per year from private wells."

The main symptom of cryptosporidiosis is diarrhea. It can also be contracted through contact with cattle.

Borchardt estimates 1,700 calves come down with "scours," the bovine form of cryptosporidiosis, each year in Kewaunee County.

Residents of rural Kewaunee County have complained of well contamination for years.

The region is known for its "Karst" geography that consists of generally shallow topsoil and porous rock that lets effluent, including waste, into the groundwater.

The study results indicate well contamination seems to depend on the depth of topsoil near a well.

Borchardt said the most severe contamination happens after a heavy rain or a fast snow melt.

Maureen Muldoon, a geologist and professor at UW-Oshkosh, said the numbers and statistics still need to be crunched.

"Which things really control whether you're going to see pathogens in your wells? So that statistical analysis and the report writing still have to happen," Muldoon said. "All the samples are pretty much collected. There has been a lot of public interest in this project."

Fifty percent of well owners who were randomly chosen opted into the testing program.

He said the initial study report findings show the county has a problem and "we need to start dealing with it."

Utesch added that county leaders should examine land use practices which he believes may have to include limits on large concentrated animal feeding operations, or CAFOS.

"I think it’s time we stopped expanding the herd here in Kewaunee County and that should be voluntary to start with. Any farmer that actually feels they need to expand, maybe they should look somewhere else to do that," he said.

There’s no timeline as to when the USDA will finalize its findings on the study. The U.S. Geological Survey was also involved in the research.