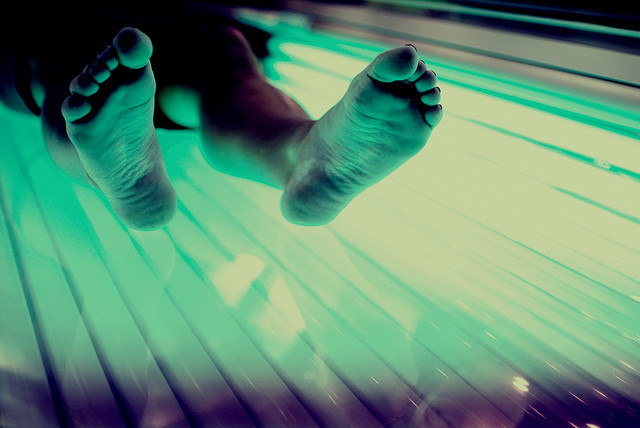 The popularity of indoor tanning has seen an increase in recent years. Photo: Valerie Yermal (CC-BY-NC-ND).

Someone Dies Of Melanoma Every 57 Minutes In U.S., Studies Say
By Marika Suval
Share:

Skin cancer is the most common form of cancer in the U.S., and the number of cases is apparently increasing at an alarming rate.

According to the Skin Cancer Foundation, the incidence of skin cancer has risen by around 300 percent in the past 20 years. A recent study in the Archives of Dermatology indicates that more than 2 million Americans develop a total of more than 3.5 million non-melanoma skin cancers every year.

Looking at melanomas, the statistics aren't much rosier. According to the Skin Cancer Foundation, one person dies of melanoma every 57 minutes in the U.S. and an expected 76,100 new cases of invasive melanoma will be diagnosed this year, with almost 10,000 people dying from the disease. While melanoma accounts for less than 5 percent of skin cancers, it constitutes the majority of skin cancer deaths.

Stefan Schieke, a dermatologist with Froedtert & the Medical College of Wisconsin, said that ultraviolet exposure is the number one cause of skin aging and skin cancers, including melanoma and non-melanoma types. Both indoor and outdoor exposure to ultraviolet radiation plays a role.

The increasing popularity of tanning beds is particularly worrying to Schieke. According to the U.S. Food and Drug Administration, about 30 million Americans use indoor tanning beds each year, among them 2.3 million teens. And although many tanning bed users say exposure to UV rays protects them against skin cancer, Schieke isn't buying it.

“There is no such thing as a protective tan,” said Schieke.

Amy Harker-Murray, a hematologist-oncologist with Froedtert & the Medical College of Wisconsin, said that although people can get Vitamin D from diet, supplementation and UV exposure, it’s better to get a daily serving of the “sunshine vitamin” from supplementation.

Harker-Murray encourages people to try to schedule outdoor time in the early morning or late afternoon.