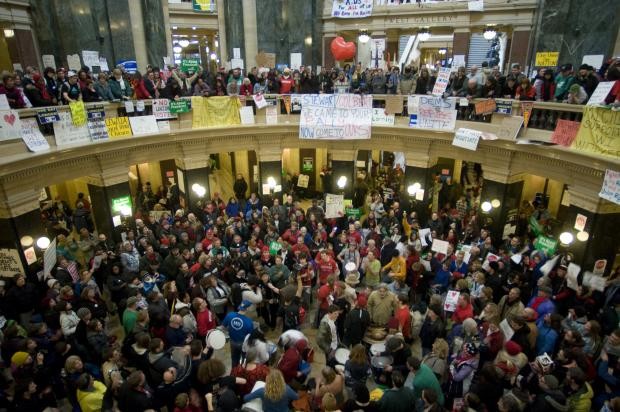 High-profile legislative action and subsequent court rulings on Wisconsin's controversial Act 10 have left public labor unions weaker than before. While it might have labor advocates down, one researcher said some private sector union numbers are up and he predicts a union comeback is on the horizon.

“That was actually on the high end in a year where, nationally, (non-public) union memberships capped at about 11.2 percent,” Eidlin said. “In the public sector, it did fall somewhat from 37 percent to 35 percent.”

Eidlin said it’s hard to tell what’s causing the growth in private-sector unions, but he said it might be a result of an overall decline in private-sector employment. As the number of employed workers decreases, the remaining percentage of unionized workers goes up.

While Eidlin said unions are in somewhat of a holding pattern right now, he predicts an increasing wage gap will bring forth a union comeback.

“The fact remains that there are real problems in the economy for large segments of the population. We are in an economy where a large percentage of economic gains are going to a small fraction, the 1 percent,” Eidlin said. “That’s creating a real sense that there’s something wrong. ... Those kinds of grievances are not going away.”

While a fresh pro-worker movement will take time, Eidlin said it will not necessarily resemble past movements.

“It has to be a broader vision of unionism that is bringing democracy into the workplace, and that’s where unions have been able to build power in the past,” Eidlin said. “Ironically, as unions grew stronger in the post-war period, that’s precisely the thing that they turned away from and turned more toward a strategy of winning influential friends in (Washington, D.C.,) and state capitals and so on. What we need to see now is a turn back from that.”

One thing the labor movements of the past and future will have in common with one another, according to Eidlin, is their origins.

“Organizing in the workplace is going to be the building block for whatever’s going to happen next,” said Eidlin.