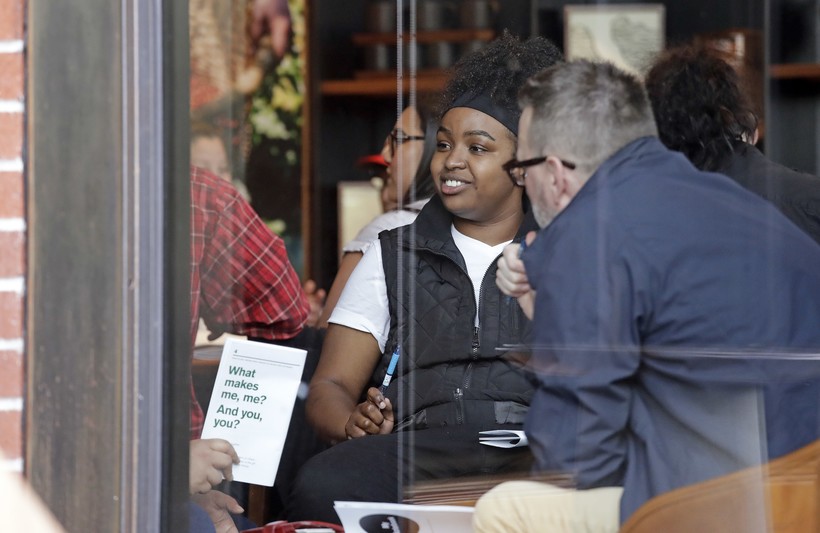 Starbucks has made headlines recently with the closure of about 8,000 stores to conduct anti-bias training. The training comes after the arrest of two black men sitting at a Starbucks without ordering anything sparked protests and backlash last month.

But does anti-bias training actually work?

According to Will Cox, an assistant scientist in the Department of Psychology at the University of Wisconsin-Madison, those trainings can sometimes backfire.

"Very often these trainings tend to focus on helping people understand that they could fall prey to bias," he said. "And what some of the research says is that trainings like that very often don't do much in terms of impacting the climate of the companies. And sometimes they actually make problems worse."

That’s because they don’t give people evidence-based tools to address these tendencies and behave in less biased ways, he said.

"And so white people kind of freeze-up and they don't want to express bias, but they don't know what else to do," he said. "And so they often will, for instance, avoid their minority co-workers because they don't want to say something unintentionally biased, and that actually contributes to a more negative environment for those minority workers."

UW-Madison has been a leader in studying implicit bias. Dr. Patricia Devine is credited with being the first to identify "implicit bias" or "unintentional bias" in her research going back to the 1980s.

"At the outset, I understood that many people, though they disavowed prejudice, were vulnerable to unintentional bias," she said in an email. "Though they intended to respond in non-prejudiced ways, stereotypes would spontaneously activate without intention and very often without awareness."

Devine says responding in a biased way doesn’t necessarily make you a bad person — kids learn stereotypes as young as 5 or 6 years old — but once they understand how to break that habit, they can overcome it.

About a decade ago Devine and Cox developed a training, called the Prejudice Habit Breaking Intervention, that teaches people about where unintentional bias comes from and how, like all other habits, that pattern can be broken.

Participants who go through the training are more aware of their potential for bias, more concerned about bias as a serious problem and more likely to identify bias in themselves and others compared to control participants, Cox said.

"In one study, two years post-intervention, participants who went through our intervention were significantly more likely to confront bias on social media than control participants," he said in an email.

Another study found the trainings had a positive impact on the hiring outcomes in STEM departments at UW-Madison two years after the training.

While not everyone has the ability to attend trainings, and it can be hard to avoid messages that reinforce bias — media plays a huge role in implicit bias, Cox said — there are strategies people can deploy in their everyday lives.

That strategy is called finding individuating information, Cox said. So in a hiring or workplace situation, getting more information about an individual — their interests, hobbies, skills — as you’re making an impression, can prevent implicit bias from seeping in.

Yet when asked whether these trainings are just the latest trend in the corporate world, and lack any muscle behind them, Cox acknowledged that that is a common observation.

"Many companies do these trainings and employees see them as just a waste of time and something that’s the employers latest fad," he said. "You have to have a training that inspires the employees not to see it that way, and you have to have commitment from all levels of the organization ... and thus far not many people have put that kind of effort into validating the trainings that are out there."

One of the biggest problems with other trainings is that they don’t have a clear goal, Cox said, and they want to fix everything in one training.

But Cox and Devine’s approach has been criticized for having too small of a scope.

"One of the criticisms some people level against us is like, well you're not trying to address societal, institutional level racism and bias, changing policies and so on," he said. "And we just agree with that."

Cox says other approaches are needed to change bias in policy, institutions and the media.

"But I think that if people can clarify and make specific the goals they have for the training, and then evaluate whether the training is making progress towards those goals, all of these diversity and bias trainings would probably be better off for it," he said.