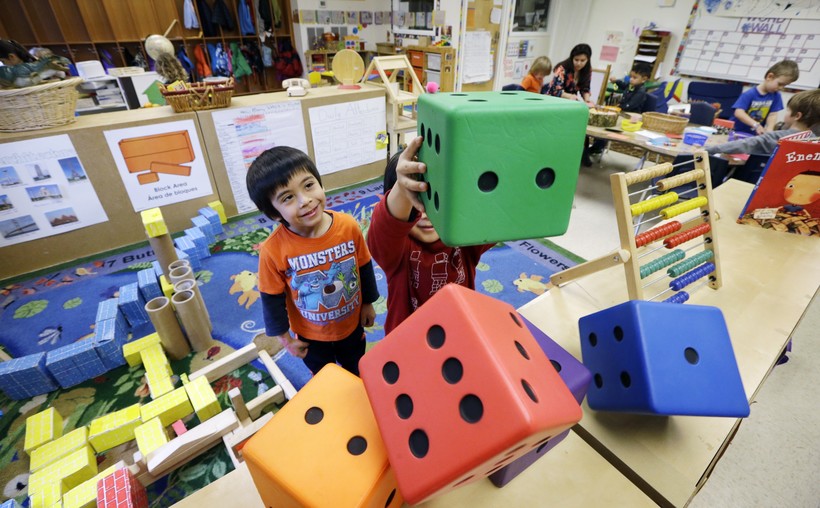 Creative Kids Learning Center, a school that focuses on pre-kindergarten for 4- and 5-year-olds, in Seattle. Elaine Thompson/ AP Photo

The biennial Early Childhood Workforce Index was recently released, and it paints a bleak picture for early childhood workers, says Marcy Whitebook, director of the Center for the Study of Child Care Employment at the University of California-Berkeley.

"We're just pointing out what's going on for the teachers of our youngest children, which is in really stark contrast to what we know about development in that period of life where development and learning is at its height and most sensitive," she said.

And those teachers are often the least trained and the least valued, Whitebook said.

In Wisconsin, the average child care worker makes about $10 an hour, about one-third the average salary of a kindergarten teacher, according to the report.

Over half of early child care workers live in families that rely on some form of federal support, Whitebook said.

"(It’s) a situation that's not new, it's been going on for decades," she said. "There's a silence around it because we really have a system in the U.S. that shortchanges everybody ... families are paying so much, a lot of children can't get ... good care, and then the workforce that we're depending on, we're basically asking them to subsidize the care at enormous cost to themselves."

Yet along with the low pay to child care workers, comes high costs for the parents sending their kids to early child care. For many families it is out of reach.

Wisconsin families pay an average of $11,579 annually for infant care — 38 percent more than one year of in-state tuition for four-year public college — and $9,469 for 4 year olds, according to the Economic Policy Institute.

Yet, with the costs of child care so high, where does the money go?

At a daycare center, by the time rent, utilities, maintenance, materials, food and administrative costs are covered, there’s not much left over to pay the necessary teachers, assistant teachers and potentially a director, according to the report.

"When you do the math ... the money just doesn't go that far," she said. "If we did that with public school, if we had parents paying for K through 12 education and we didn't share that across society as a whole, parents would be sort of you know, buckling under the weight of that."

"Rather than sort of looking at the situation saying, 'oh my goodness we could help families' … we don't do that," she said. "Some because people think that children shouldn't be in child care ... or that there is no money."

We also tend to think that early child care workers need less education, skill and training than other educators, Whitebook said. But the science says we have that flipped, she said.

It’s a mistake to think that early childhood education is starting a school and academic curriculum earlier, she said. In those early years, learning occurs through play and focuses on how to get along with other children.

"When people think about early care and education, the image that pops in their mind is toddlers, you know, sitting behind desks, rather than thinking about what does education look like for younger children ... and it looks like play ... facilitated play," Whitebook said.

According to the National Academies of Sciences, Engineering and Medicine, it would take $140 billion annually from public and private sectors to make high quality care in early childhood education accessible and affordable.

"Pretty much across the board it's a social investment," Whitebook said. "It's a good place to put our money, but it's ... hard to get people being willing to direct our money there."