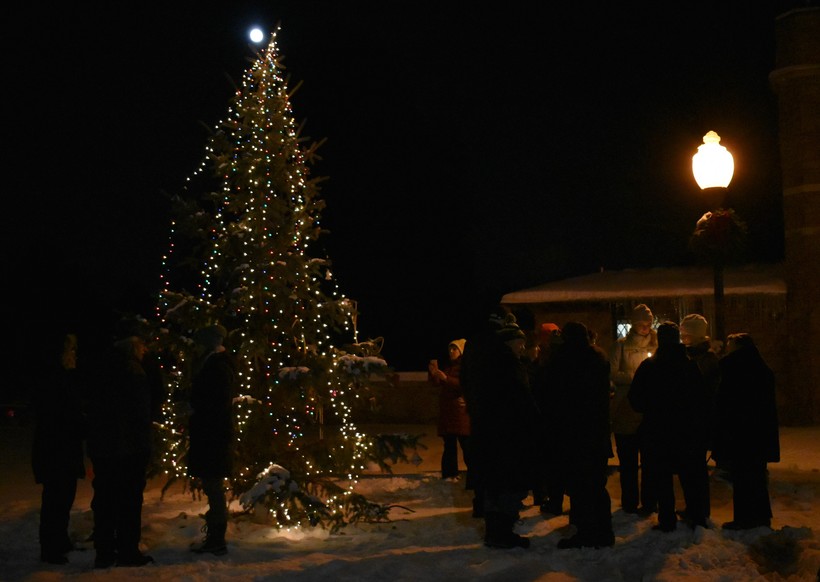 Visitors stand by a remembrance tree in Wausau's Pine Grove Cemetery, Wednesday, December 11, 2019. The tree was dedicated to Patty Grimm, who died in a shooting at the cemetery in October. Rob Mentzer/WPR

Association: Patty Grimm 'Knew How To Love People, And They Loved Her'
By Rob Mentzer
Share:

A Christmas tree standing near the entrance to Wausau's Pine Grove Cemetery will honor the woman who was shot and killed there in October.

At a ceremony on Wednesday evening, friends and family of Patty Grimm gathered for the lighting of the tree. It's intended as a way for people to remember Grimm, the cemetery manager who died there on Oct. 3. And community members are invited to add the names of their loved ones or a meaningful ornament.

Grimm "knew every soul in this cemetery," said Pat Haskin, who volunteers with the Wausau Cemetery Association. "In her honor, we just felt that we needed to do something positive to bring out the good things in people."

The remembrance tree is for anyone who wants to use it to honor someone they've lost, Haskin said. On Wednesday, many were there to honor Grimm.

Grimm was known in Wausau for her passion for local history. She treated the cemetery as a sacred place, walking its grounds daily. She helped keep alive the stories of those buried there by helping to organize cemetery tours hosted by the Marathon County Historical Society.

She also led the Wausau Cemetery Association and served as a citizen member of Wausau’s Historic Preservation Commission. 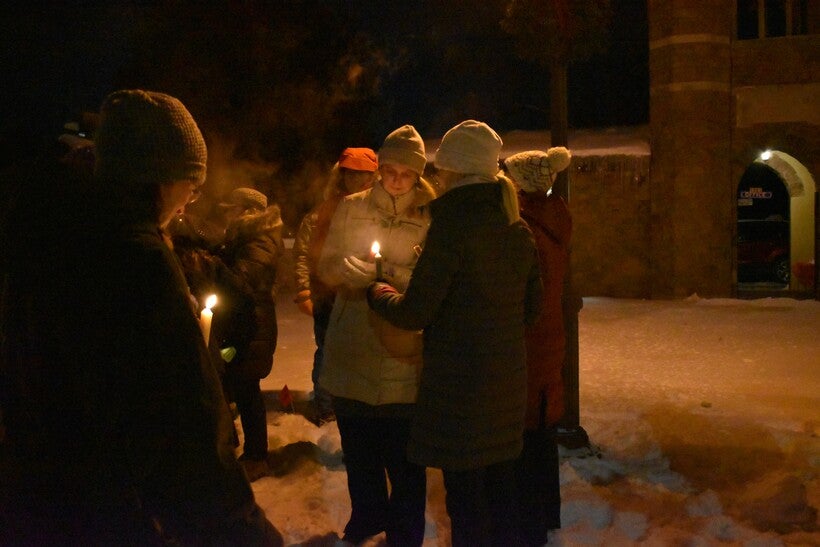 The shooter also shot two other people at the cemetery. A 70-year-old woman had minor injuries. Willam Buhse, 60, a cemetery groundskeeper, remains hospitalized with traumatic brain injuries. A GoFundMe site maintained by his family included a Nov. 3 post: "He will be relearning normal daily activities: walking, talking, eating and such. They say after about a year, the things that have come back are more than likely what he will recover."

Police arrested Henry V. West, a 64-year-old former employee of the cemetery, shortly after the shooting. He was fired from the cemetery in 2012 and has been charged him with first-degree intentional homicide in Grimm's death.

West has also been charged with 11 counts of attempted homicide, as well as arson and attempted arson. Prosecutors say he connected a toaster to a timer and placed it next to bottles of oil and gasoline, then plugged in a pizza oven on the floor next to another container of gasoline. Police found the charred ashes of a wick burning next to the intended explosives. He subsequently cut the gas line in a building next door and set fire to the apartment complex’s garage before riding his bike to the cemetery, according to court documents.

The Wausau Daily Herald reported that cemetery employees, including Grimm, were afraid of West at the time of his firing in 2012. An employee told police West was a "very scary person," according to a 2012 police report obtained by the newspaper.

West is in jail on a $10 million cash bond. In court Wednesday, he waived his right to a preliminary hearing, meaning his case will proceed.

At the ceremony Wednesday night at the cemetery, Wausau Mayor Robert Mielke called Grimm "a wonderful person who would do anything for anybody."

In a press release, the Wausau Cemetery Association wrote that Grimm "certainly knew how to love people, and they loved her."