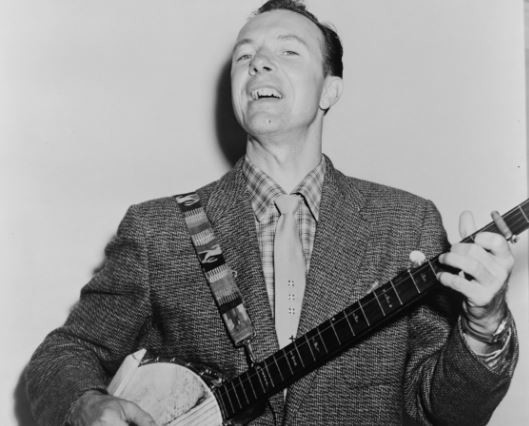 Pete Seeger never looked like a revolutionary. Sporting squinty eyes, usually dressed in bland, workman-like clothes and with a banjo on his knee, Seeger had none of the flash and theatrics of others who brazenly seek to go against society's currents.

But, without cultural insurgents like Seeger, it's unlikely America would have rediscovered and conserved its folk music traditions, not to mention discovered musical giants like Woody Guthrie, Lead Belly and Bob Dylan. So, it's a cruel twist that when the history of 20th Century American music is set to paper, colossal creative figures like Guthrie and Dylan will loom taller in the story than Seeger. But, it's also safe to say that Seeger, while eclipsed in fame, is a inextricable presence in American cultural history not only in setting the stage for some of the greatest songwriters of the age but also in safeguarding the nation's folk music tradition for future generations.

Seeger died on Monday. He was 94 years old.

Starting from the '50s forward, Seeger was a ceaseless proselytizer for folk music, traditional songs forms and the leading lights of his era. On his own or with his group, the Weavers, Seeger played Guthrie and Lead Belly's music long after they left the stage and then dutifully tended to their legends. Seeger also mentored the young artists of the '60s like Dylan, Joan Baez, Phil Ochs and others, who led the first folk revival. It was this music that became the soundtrack to the Civil Rights movement and influenced a sea change in rock 'n' roll.

But, despite his achievements, Seeger's path wasn't always an easy one to follow. He was a target of persecution during the '50s Red Scare for his previous Communist affiliations. He later became a subject of Old-Guard ridicule for allegedly expressing anger about Dylan's turn toward electric rock 'n' roll during the 1965 Newport Folk Festival.

Seeger survived changing tastes and fashions. He endured by continuing to preach the gospel of American folk traditions -- no matter their standing in popular culture. He would appear with contemporary artists like  Bruce Springsteen and Woody's son, Arlo Guthrie, to reach new, sympathetic audiences. In those collaborations and in each show he performed himself, he influenced countless generations who hadn't previously discovered these songs.

Through each performance, he shone a light on an underappreciated reservoir of cultural riches. In this, Seeger was a teacher as much as a musician. He could be pedantic as only a scholar can be, but his zeal was none the less infectious. He also never departed from championing left-leaning perspectives and causes. As American society evolved in the latter part of the 20th Century, some of Seeger's previously controversial political opinions became less so.

If when history is recorded, its bias favors innovators, prophets and rule-breakers, Seeger is unlikely to earn his own chapter. But his presence and achievements as mentor, evangelist and chief conservator make him a pivotal figure in American music.

Here's a compilation of a few Seeger performances that go beyond the usual hits:

Seeger's father was a musician and ethnomusicology scholar. This is likely the source of Seeger's proctor-like attitude as a performer, but it also might explain his attraction to songs that he saw as embodying the best aspects of American folk tradition.

This song, which was allegedly arranged by martyred, pro- union singer Joe Hill, builds off the railroad tall tales about Casey Jones.

"Which Side Are You On?"

Seeger was at his most poignant when tackling a labor-movement anthem. Accompanying himself only with a banjo, Seeger sings each rally-cry line with great focus and power. He's so powerful that he leads the sympathetic crowd to sing along with him with scarcely any coaching. With this performance, it's not hard to imagine Seeger led the crowd out of wherever they were gathered and marched them into the streets.

Seeger claims that the Spanish-language, Caribbean folk song, "Guantanamera," is one of his favorite songs. Sung with his musician grandson, Tao Rodriguez-Seeger, and a backing band, the elder Seeger demonstrates his ethnomusicological interests extend beyond just U.S. shores.

"The Ghost Of Tom Joad"

In this cover of a Bruce Springsteen song, Seeger excellently repays a debt to the Boss for his hailing of Seeger's lifework. In 2006, Springsteen released an album, "We Shall Overcome: The Seeger Sessions," which featured recordings of folk songs that Seeger had performed throughout his career. "Tom Joad" was first recorded during Springsteen's solo, acoustic years in the '90s without the E Street Band. With lyrics drawn from John Steinbeck's "The Grapes of Wrath" and a message that champions the poor and downtrodden and the coming reckoning, it's easy to see why "Tom Joad" would appeal to Seeger.

During this recording from around 2007, Seeger essentially narrates the lyrics while Springsteen acts a fixer for the chorus adding backing vocals and various guitars. It's a spooky, beautiful rendition of a powerfully bleak song.

"Turn, Turn, Turn" was one of the few songs that Seeger performed that he wrote himself. He adapted the lyrics from passages in the Bible and set it to a melody. The song is best known not because of Seeger's version, but because it was covered by '60s folk-rockers the Byrds. Their rendition became their second-major hit after a cover of Dylan's "Mr. Tambourine Man."

In this New York City performance from November 2012, Seeger demonstrates his tenacity -- how he hadn't abandoned desire to school his audience -- even as old age sapped his singing and playing. Listeners can hear Seeger instructing and leading the crowd as much as entertaining them, with the goal of steeping them in folk music traditions. The performance even includes a few new, amusing verses that Seeger said he didn't perform since he first wrote the song.

Here's a pair of videos that are just too interesting not to include. In this 2013 interview with left-leaning public media program, "Democracy Now," Seeger tell his version of the infamous Newport story. He claims that he never wanted to take an axe to the power supply for Dylan's electric instruments, he just threatened to because of the distortion in the amplifiers.

This clip is an episode of "Rainbow Quest," a short-lived, mid-'60s TV program that Seeger hosted. In it, Seeger performs a series of songs with country legend Johnny Cash and his wife, June Carter Cash.

Having Johnny Cash and June Carter Cash share a stage with Seeger still seems somewhat awkward despite their shared love of American musical forms. Their interactions, differing stylistic attitudes and unique interpretations of this common tradition is symbolic of the richness and breadth of what today is known as Americana music. This show should be a masters class for any intrepid roots musician.