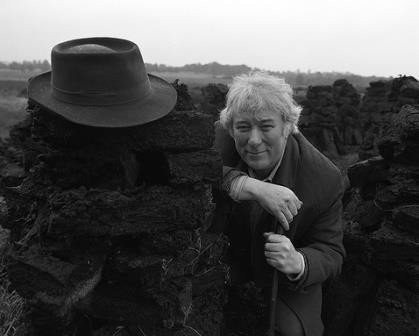 Poet, playwright and Nobel laureate Seamus Heaney passed away late last month at the age of 74.

Often called the "greatest Irish poet since Yeats," Heaney's passing was deeply felt throughout his homeland and around the world. In a statement, Irish Prime Minister Enda Kenny wrote, “Seamus Heaney’s death brings great sorrow to Ireland, to language and to literature. He is mourned -- and deeply -- wherever poetry and the world of the spirit are cherished and celebrated.”

Heaney became the fourth Irishman to win the Nobel Prize in literature in 1995, following William Butler Yeats in 1923, George Bernard Shaw in 1925, and Samuel Beckett in 1969. A Roman Catholic native of Northern Ireland, Heaney authored more than 12 collections of poetry, and was one of the most read poets in the world.

Jason Hall, a senior lecturer at Exeter University in Great Britain said he had broad appeal.

"He was a literally poet, but he was also a poet for the people. That's why he has such a command of the public ear as he does, to the extent that people who liked his poetry were called 'Heaney-boppers,'" Hall said.

In his poem, “Digging,” Heaney pays homage to the work of his father and grandfather, and compares their work in the field, to his as a writer.

Between my finger and my thumb

The squat pen rests; snug as a gun.

Under my window, a clean rasping sound

When the spade sinks into gravelly ground:

My father, digging. I look down

Till his straining rump among the flowerbeds

Stooping in rhythm through potato drills

Where he was digging.

The coarse boot nestled on the lug, the shaft

Against the inside knee was levered firmly.

He rooted out tall tops, buried the bright edge deep

To scatter new potatoes that we picked,

Loving their cool hardness in our hands.

By God, the old man could handle a spade.

My grandfather cut more turf in a day

Than any other man on Toner’s bog.

Once I carried him milk in a bottle

Corked sloppily with paper. He straightened up

To drink it, then fell to right away

Over his shoulder, going down and down

For the good turf. Digging.

The cold smell of potato mould, the squelch and slap

Of soggy peat, the curt cuts of an edge

Through living roots awaken in my head.

Between my finger and my thumb

I’ll dig with it.

Portion taken from “Death of a Naturalist,” published in 1966. Copyright Farrar, Straus and Giroux, LLC.