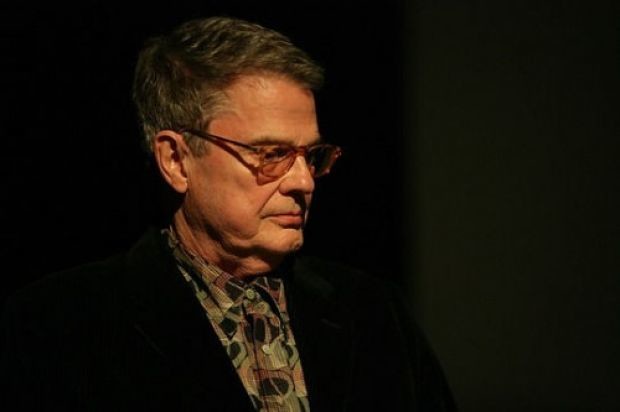 As it goes, the archetype for a rebel or revolutionary invokes an image of someone who is bold, a person who stands out in the crowd.

In the case of jazz bassist Charlie Haden, however, his playing and career modeled another pathway to upending the established musical order: the role of the insurgent. Playing for years behind many of music’s most overt sonic mavericks, Haden quietly and unassumingly did much to break down barriers separating genres and styles. In the course of his six decades of playing, Haden become not only one of the founding fathers of free jazz, but also a musical polymath.

Haden died on Friday in Los Angeles. According to the New York Times article, he had struggled in recent years with "the degenerative effects of post-polio syndrome, related to the polio he contracted in his youth." He was 76 years old.

As it goes, Haden will most likely be best remembered for being one of the young radicals backing Ornette Coleman and assisting in the birth of free jazz in the late 1950s. As one of Coleman's top lieutenants, Haden provided the musical foundations for this new, controversial music's greatest calling cards, "The Shape Of Jazz To Come" and "Free Jazz: A Collective Improvisation."

But beyond his long association with Coleman, Haden's choices never made peace with predictable conventions. He continued to push stylistic boundaries and challenge the music in ways that would likely abhor Wynton Marsalis and others whose view of jazz is to reduce the music to a static artifact, repeated over and over again. But, this wasn’t the way Haden saw it.

“I want to take people away from the ugliness and sadness around us every day and bring beautiful, deep music to as many people as I can,” Haden told the Associated Press in 2013.

It's a mark of Haden's versatility, his musicality and his rebellious nature that his discography includes sessions with a wide array of leading figures in the jazz world -- each with wildly different worldviews and musical strengths. Haden performed with John Coltrane, Dizzy Gillespie, Don Cherry, John McLaughlin, Keith Jarrett, Joshua Redman, Pat Metheny and Joe Henderson -- but also sat in with mainstream (sort of) rock performers like Rickie Lee Jones, Ginger Baker, the Minutemen and Yoko Ono.

Beyond being a sideman, Haden continued to expand on his vision with his own bands -- first the freewheeling, eclectic Liberation Music Orchestra and later, the more refined combo, Quartet West.

While it’s unlikely that Haden’s legacy will displace the many luminaries he shared a stage or studio with – bassists are always in shadows, literally and figuratively – but his work still speaks to those looking to push music forward. Where once Haden and his comrades were seen as alien outliers in the well-structured musical landscape, he was eventually regarded as a consummate musician’s musician and a hero by the end of his life

In 2013, Haden received a Grammy Lifetime Achievement Award. Finally, this insurgent accomplished what every reformer dreams of: winning the crowd over.

Here is a list of Haden’s all-star turns (in no particular order):

The song is likely the best-known track from Coleman’s “The Shape Of Jazz To Come,” the 1959 record that catalyzed the free jazz concept and announced Haden’s arrival on the music scene.

Haden wears his politics on his sleeve on the ballad, “Song For Che.” His mentor Coleman recorded the most popular version of the song, and according to legend, Haden was briefly jailed by Portugal’s fascist government the 1970s for sending out a dedication to groups of anti-colonial revolutionaries before he and Coleman performed the song. Listen to how Haden's bass runs somersault around and occasionally joust with the drumming and Coleman's horn playing.

During the height of Haden’s musical and political firebrand days, the Liberation Music Orchestra was a particularly effective vehicle for Haden to express his point of view. The group’s 1969 self-titled album was the best and most experimental effort. The songs drew on wide ranging influences – from American musical standards like “Dixie” and “Battle Hymn Of The Republic” to sounds from the Spanish Civil War and of course, Coleman’s music.  This suite stretches nearly 21 minutes and never fails to amaze in its odd marriage of scope and precision.

Old and New Dreams was a collaboration between many of Coleman’s old cronies, including Don Cherry, Ed Blackwell, Dewey Redman and Haden. The member had all done time in Coleman’s band and sought to expand Coleman’s improvisational mindset, but now outside the master’s gaze. On this recording of a performance at the Molde Jazz Festival in 1979, the ensemble breathes new life into Coleman’s "Happy House” to startling effect.

“Ramshackle” is a most unusual coda on Beck's boldest, most iconoclastic and most popular album, 1996’s “Odelay.” On an album filled with cutup samples, style blending and all-purpose stylistic mayhem, “Ramshackle” is curveball -- an acoustic, dirge-like bolero. Haden’s deep, rich tone provides the necessary drive that fills the song and supports the stark, Spanish-flavored guitar chords. A story goes that such was Beck’s esteem for Haden that he insisted on only referring to him as “Mr. Haden.”

For one album, John Coltrane swiped Coleman’s band, including Don Cherry and sometimes Haden, for a little experimentation in free jazz. “Cherry-Co” suggests greater accomplishments might have been realized had these three giants spent more time together.

Performing with guitarist Pat Metheny, Haden demonstrates again his range and far-flung musical passions with his own composition, “Blues For Pat.”